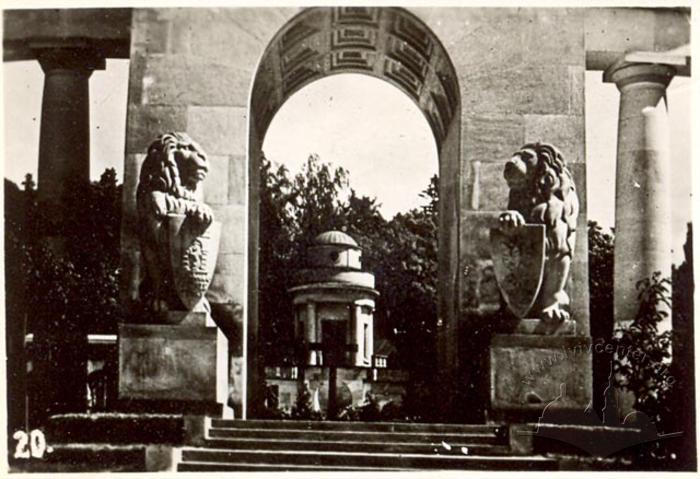 Fragment of the Monument of Glory and the central entrance through the colonnade to the Orląt ("Young Eagles") Cemetery complex in the Lychakiv quarter. On the Orląt Cemetery Polish soldiers are buried, who perished during the dramatic events of the Polish-Ukrainian war in 1918-1919. The competition for the memorial project was announced in 1921. The winner was a young engineer, a student of architecture at the Lviv Polytechnic, Rudolph Indruch. The first stage of the project was the building of a chapel, the corner-stone of which was laid on June 26, 1922.
The consecration took place on September 28, 1924. A monument to American pilots, who fought against the Bolsheviks in 1920, was opened on May 30, 1925. The building of the catacombs lasted until October 1932. On April 28, 1929 the ceremony of consecration of the corner-stone of the Monument of Glory took place. The monument was opened on November 11, 1934. The inscription on the gate of the 12-column portico reads: "Mortui sunt ut liberi vivamus". On May 26, 1938 a monument to French infantrymen, who also fought the Bolsheviks in 1920, was erected next to the right wing of the catacombs.