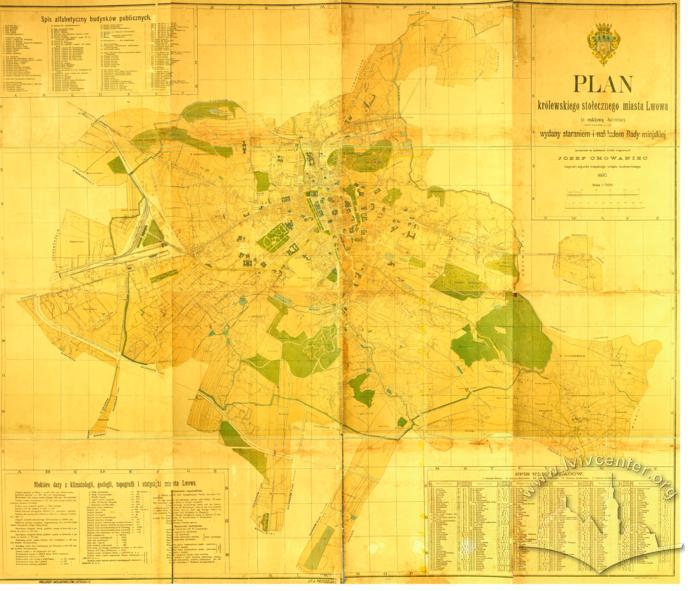 Plan of the Royal and Capital City of Lwow (with an enclave of Jałowcy and Maszow. Lwow I Part)

The plan shows the limits of the city territory, with suburbs, surounding villages, and nearby territories beyond city limits. A separate capsule on the plan's western side shows the territories of Jalowiec and Maszów (above today's intersection of Lychakivska St./Pasichna St./Hlynianskyi Tract).

The plan dates to 1890. It was prepared for printing on the basis of archival sources by Józef Chowaniec, Engineer-Adjunct of the Construction Department of the Lviv City Council.

The graphic aspect of the plan was exectuded by K. Haniszewski. The creation of plan was funded by the city council, and printed at the Lithographical establishment of A. Przyszlak, which was active in Lviv from 1883 through 1921. Przyszlak's daughter ran the lithographic busienss in the final year of its activity. In 1921, the lithographical establishment was sold to the "Polish Book Fund" (Kniążnica Polska) Society that, after its merger with the "Grafia" printing press, was renamed "Polish Book Fund" (Kniążnica-Atlas) [32], p. 15. The company's premises were at today’s 12, Vynnychenka St. [33], p. 217.

A peculiarity of the graphic execution of the plan is that it displays certain objects, which, at the time of its publication, were still in projecting stage, such as the building of the Industry Museum (today's building No. 20 in Svobody Blvd.), the premises of the Industrial School (today's No. 17, Teatralna St.), and Konarski School (15, Teatralna St.).

The legend holds a list of institutions, street and square names, grouped into two tables. A separate table contains information on certain peculiarities of Lviv.

The plan's topomymics include around 500 objects:

Inaccuracies and inconsistencies on the map:

"Royal and capital city" is a term that was introduced after the adoption of the city self-government statute in 1870. The plan shows the consequences of intensified construction and major modernizations in the city. By 1890, the city had around 140 public buildings, 40 of which had appeared in recent years, and 14 of which had been constructed using the funds of the city community (gmina) [34], p. 91.

The late 1880s and early 1890s were the time of renovation or reconstruction for a number of sacred buidlings: St. Anne Church, St. Martin, St. Peter and Paul, Our Lady of the Snow, St. John, the tower of St. Mary Magdalene, and the Church of Paraskeva Piatnytsia. [31], p. 338.

The use of concrete since 1878 not only influenced the construction movement in the city, but also intensified the process of laying new sewage canals. About 300, 000 Zlotys were spent over the period of 1883-1892 to cover the river Poltva. From 1884 through 1890, concrete canals were laid along Akademicka St. (now Shevchenka Blvd.), Karola Ludwika St./Gołuchowskiego Sq. (now Svobody Blvd.), and Rzeźni Sq. [31], p. 322-323.

The plan reflects the fact that Lviv became significantly greener around this time, due to the construction of green areas in all city districts, and the laying of new (and renovation of old) parks and strolling areas. 1879 saw the laying of the Stryiskyi Park, which, in 1888 was extended and renamed Kiliński Park (Park Kilinskiego). In 1881 and 1886, there was re-planning of the alleys of the City Garden (Ogród mięski). The new Lychakiv Park was laid and planted in 1884. The central strolling area at the Hetman's Bulwarks (Wały Hetmańskie) was widened and planted with growth in 1888-1890. The garden near Strzelnica was extended and decorated in 1890 [31], p. 227; 318-320.

The horsedrawn tram began running regularly in Lviv in 1880. It was introduced by the "Società triestina Tramway", a joint stock company from Trieste. Originally, the city had two tram routes: Route 1 ran from the Central Train Station to Cłowy Sq. (now Mytna Sq.); Route 2 ran from Gołuchowskich Sq. (now Torhova Sq.) to the Żółkiew/Zhovkva Turnpike (Żółkiewska Rogatka, now corner of Khmelnytskoho and Volynska St.). Together, these lines accomodated around 2 million people in 1890. [31], p. 330; [20], p. 102.

The population of the city, together with suburban territories (Kleparów, Zamarstynów, Źniesienie and others) came up to 136,584 persons. Population growth was reliant mostly upon immigration, as well as natural population growth, which, over the period from 1890 through 1990, was about 40 per cent from the total population growth for Lviv [20], p. 64-65. The present plan, however, shows different statistical data as to the number of Lviv’s residents (123,000).

As of 1890, the city had 3,322 residential buidlings with 22,532 apartments. From 1890 onwards multi-storied buildings begin to replace single-storied structures as the dominant form in the city construction. After 1890, construction of small (workers’) buildings was concentrated beyond the city limits, in the territories of suburban communities (gminy). [20], p. 62. The present plan provides different data as to the number of residential buildings in the city (3,760).