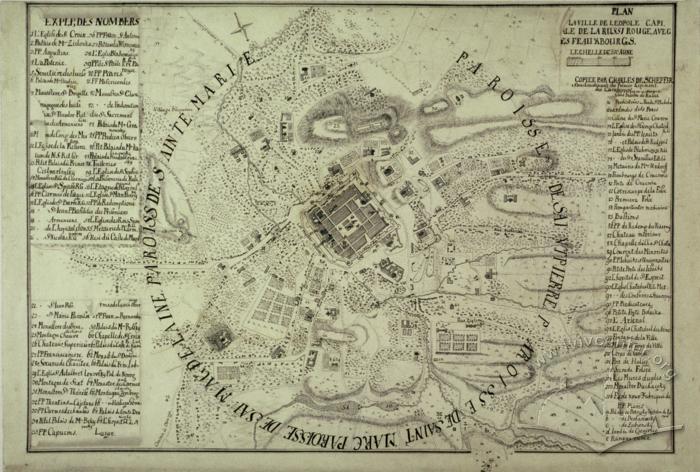 The plan is a schematic depiction of Lviv and its environs. It shows the condition of city construction with the contemporary fortifications of the central part of the city, sacred objects, and palaces.

The plan provides no date. The legend and the graphic depiction of the city are similar to the ones performed by Jean Doetch on his 1770 plan, which permits us to make suppositions about the date of the present plan.

The plan was executed by Charles de Scheffer, junior lieutenant of the First Carabiniers Regiment.

The plan provides a schematic depiction of the city space on the eve of significant urban transformation, which began after Lviv was taken by the Austrian forces in 1772.

The map presents the Inner city part, surrounded by walls, and the irregular construction of the surrounding territories, dominated by churches, monasteries, and palazzos. 1770 was a memorable year for Lviv, because of the large flood, which lasted from January until June [9], p. 274.

Approximate data as to the number of buildings is only available for 1790. Based on a report by a scientist and traveller then visiting the city Baltasar Hacquet, there were around 2,759 buildings in the city at the time of the map's publication [20], p. 30.