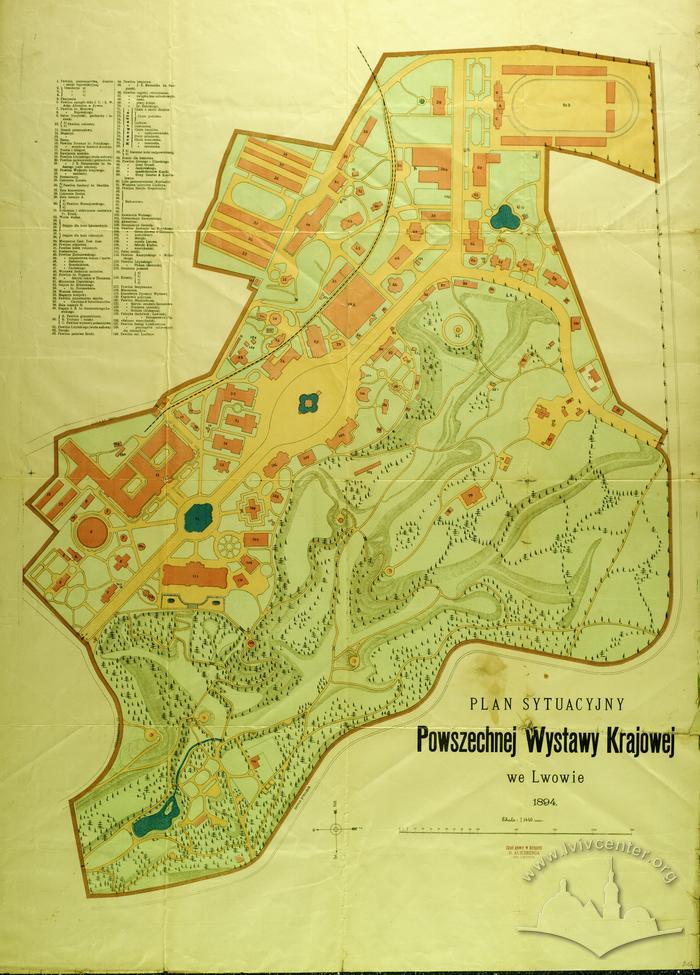 Situational Map of the General Regional Exhibition in Lwow

The map was published by Herman Altenberg's Bookstore in Lviv. H. Altenberg started his publishing company in 1880 by buying F. G. Richter's bookstore and book-lending library at 4, Mariacki Square (now Mitskevycha Sq.). After Altenberg's death, the bookstore was run by his widow Zuzanna Altenberg, who was assisted by Władysław Bełza.

Inconsistencies and Inaccuracies on the Map:

The map shows the pavilions of the General Regional Exhibition in the territory of the Stryiskyi Park in Lviv. The exhibition was held under the auspices of the Austrian Emperor Francis Joseph, and was dedicated to the 100th anniversary of Tadeusz Kosciuszko's uprising. The organizational committee was headed by Prince Adam Sapieha, while Zdzisław Marchwicki was appointed its general director [72], introduction.

The upper terrace of the park was ordered especially for the occasion – sewage and gas lighting were installed. Electric tram tracks were laid in the newly-built road leading to the main gate. The tram transported the visitors from the exhibition to the central part of the city, and to the train station [31], p. 151, 152.

The exhibition grounds also had a railway track used to convey cargo and materials, as well as a cable car connecting the Ethnography Department with the exhibition's main alley [34], p. 168-169.

The cost of organizing the General Regional Exhibition comprised around 600 thousand złoty [34], p. 168-169.

The festive opening of the General Regional Exhibition took place on June 5, 1894, with the participation of Archdukes Leopold Salvator and Karl Ludwig. Many artefacts were exposed at over 129 special buildings or pavilions. The exhibition's catalog listed 2,870 objects. The main focus of the event was placed on various crafts, and the activities of industrial companies or small businesses. In addition, attention was given to the topics of the arts, schooling, and ethnography.