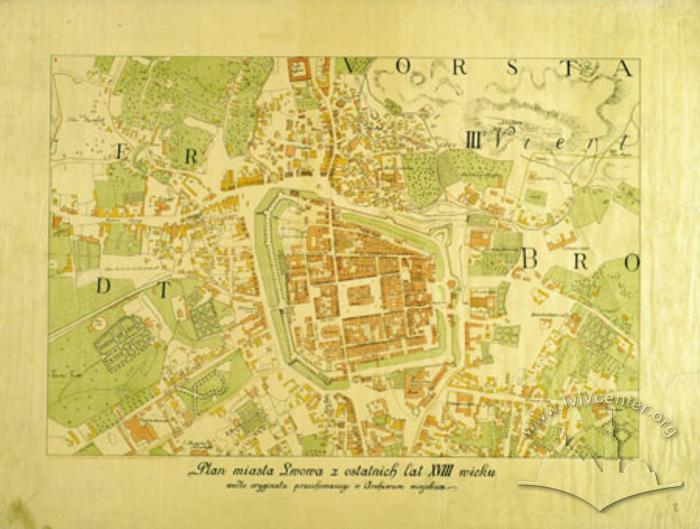 A reproduction of the map of the central part of the city, with part of the territories of the four suburban districts.

The plan is not dated. Since it shows the building of the Hecht Casino, and provides only a schematic depiction of the demolished Nyzkyi Zamok (Low Castle) building complex, we can assume that it was drawn around 1799-1802  [48], с. 75.

No information is provided on the map's author. The present reproduction was performed on the basis of the Plan of the City with its Suburbs (Plan der Stadt samt ihren Vorsädten). The reproduction only uses the territory that directly adjoins the city center.

In comparison with the original plan, the reproduction: employs a larger scale, provides less detail of the relief of the locality, provides schematic depictions of certain construction elements that were absent on the original map (such as the High and Low Castle buildings).

The map was drawn to order of the Measurements and Regulations Division of the City Council's Technical Department possibly between 1911 and 1915.

The plan was printed at the "R. Brzeziński and Co., Arts and Graphics Establishment, Ltd.", a specialized institution for producing color reproductions. Roman Brzeziński was a photographer and publisher. From 1905 until 1911, he was a member of the Lwów Photographic Society (Lwowskie towarzystwo fotograficzne). In 1907-1911, he was executive editor of the "Photography Monthly" (Miesięcznik Fotograficzny) [27] p. 57-58.

R. Brzeziński opened an establishment specializing in publishing color reproductions in May 1911, in the premises of the former Mikolasz Passage (1/3 Kopernika St.). The establishment eventually moved to Pańska St. (this street exists today as part of Ivana Franka St.). Brzeziński died in February 1915 at the age of 33. [27] p. 75.

The plan's toponymics include around 80 object. All names are provided directly on the plan, next to the respective objects.

The plan reflects a late-eighteenth-early nineteenth century urban space of the central part of Lviv.

The graphic execution of the map shows a number of urban transformations from the late eighteenth century. Among the most important changes were the start of the demolition of defense walls and drive in gateways (beginning in 1777), secularization and the closing of most monastic orders and churches (1773, 1783-85), the closing down of churchyards in the central part of the city, and transfer of all burials to the suburbs (1784-1785), the transfer of retail shops from around the Roman Catholic Cathedral to buildings emptied after the demolition of the city gates (1800), the organization of a marketplace at the location of the demolished Nyzkyi Zamok (Low Castle) complex (1802) [23], с. 64, 66.; [26], с.30, 98.

Worthy of mention among other innovations of the Austrian authorities are the opening of the university and the institution of a police force (1784), the creation of a postal administration and health service (1789), and the creation of the first sweet shop, founded by Dominic Andriolli (1803) [23], с.68, 70