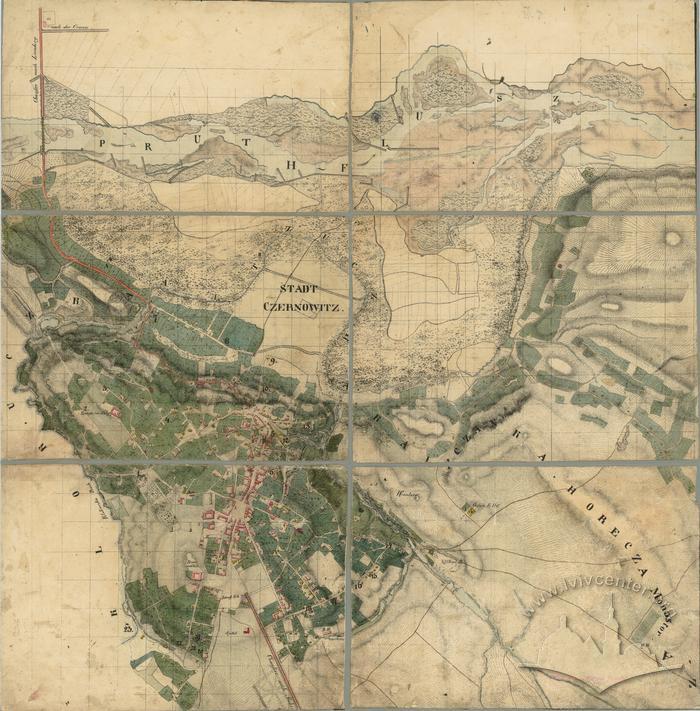 This map of Czernowitz with environs shows its street and road network, as well as the city's buildings, which at the time of the map's publication, was concentrated along the main street, Hauptstrasse (now known as Holovna Street).

It is likely that the map is a fragment of a larger map drawn for military uses.

No date is provided on the map. The existence of the People's Garden plot, projected in the 1830s, allows us to date the plan roughly to that decade.

The map's toponymics include 19 objects:

Czernowitz became part of the Austrian Empire in 1774, as a small town with mostly wooden buildings and a population of around 2,000 people. In 1779 the city became the administrative center of Bukovina, and in 1786 it became the center of the Nineteenth District of the Kingdom of Galicia and Lodomeria [66], p. 111-119

The map shows the changes that took place in Czernowitz's planning structure from the late eighteenth century, through the first third of the nineteenth century. At the turn of the century, the city began to branch out to the south of its historic center; new districts with a new market square were formed here. Thus arose the division into the Lower city (northern part of Czernowitz), and the Upper city (its southern part).

The time period between the late eighteenth century and the first third of the nineteenth century saw very intensive construction in the city. Public and religious buildings were built, as well as residential blocks for officials, merchants, artisans. The central part of town usually included two-storied buidlings  [67], p. 12

The map shows Ruska St. (laid in 1816 – 1820), with the Greek Catholic (Uniate) Church of St. Peter and Paul the Apostles (constructed in 1820 – 1821, now known as the Church of the Dormition of the Most Holy Theotokos). The map shows a Pieta in the Market (now Tsentralna) Square. This monument, in the form of a cross on a pedestal, was erected in 1827. The southern part of town on the map shows the layout of the People's Garden, which was projected in 1830.

According to Keindl, as of 1836, Czernowitz had 956 buildings, which were home to 1,779 families. If we include the residents of surrounding villages, this number increases to 1,858 buildings and 2,960 families. Thus, the total population of the city with surrounding villages comprised 14,800 people [66], p. 233

Symbols on the map: