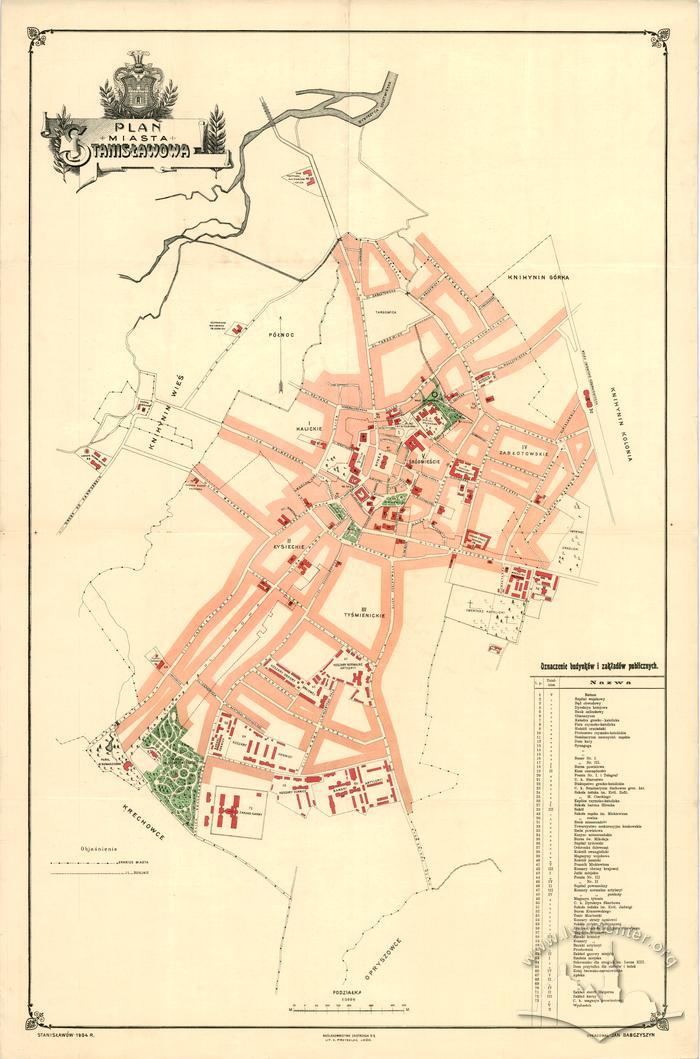 Plan of the City of Stanisławow

The plan shows the limits of the city of Stanisławow (renamed to Ivano-Frankivsk in 1962) with its suburbs, surrounding villages, as well as adjacent territories beyond city limits.

The plan was printed at Antoni Przyszlak’s lithographical establishment in Lviv.

The legend provides a numbered list of institutions, grouped in a table.

The plan’s toponymics include around 170 objects:

Stanisławow was founded in 1662. By the early twentieth century, the city was capital of Stanisławow district (powiat) and court district within the Galician crownland of the Austrian-Hungarian monarchy, as well as the seat of a Greek Catholic (Uniate) Bishop.

The city underwent large-scale modernization in the late nineteenth century. The first railway track through the city was laid in 1866 (Lviv – Chernivtsi), a railway station was constructed the same year (and rebuilt in 1906-1908), and 1894 saw the construction of the Railway Administration building (the second Railway Administration to be built in the lands of Galicia and Bukovyna after Lviv). Towards the end of the nineteenth century, Stanisławów became a major railway junction, servicing 30 trains running in five directions [38], p. 78-79.

First electric lights were introduced in 1897 (at the railway station), and by the early twentieth century the city’s largest houses were powered by autonomous dynamos [38], p. 84-85. The early years of the twentieth century saw the arrival of automobiles in the city streets. The first cars belonged usually to local landowners and factory owners [38], p. 83.

As of the early twentieth century, the city was home to several dozen industrial companies (these were usually small – only four were officially factories) [37], p. 629. Among the largest and most important ones were the mechanical locomotive repair workshops, the city gas factory (operating since December 1902), the brewery, the Liebermanns yeast and alcohol factory, the J. Margoszes’ leather factory [39], p. 14-15.

1904 saw the construction of a new Roman Catholic Church of Our Lady of Unwearying Help in Stanisławow in 1904 (in today's 20, Hordynskoho St.), as well as a Regional School of Timber Industry, and a large new trading mall [38], p. 56.

The turn of the twentieth century was a time of cultural renaissance. A theater opened in 1892, along with the Moniuszko Music Society [40], p. 40. A Polish Gymnasium (high school) opened in 1904, with a Ukrainian counterpart opening next year, followed by another Polish school in 1907. 10 newspapers were being published in Stanisławow as of 1904, including 5 Polish, 2 Ukrainian, 2 German, and one Jewish [38], p. 52.

Like other cities and towns of Galicia, the central part of Stanisławow was gradually beginning to appear more and more like modern European cities. Many buildings had multiple stories, the streets were paved, and sidewalks appeared. The ground floors of buildings housed shops, ateliers, workshops, pharmacies, and coffeehouses [41], p. 193. In the early twentieth century the city was second the most well-kept city in Galicia after Lwow [42], p. 302.