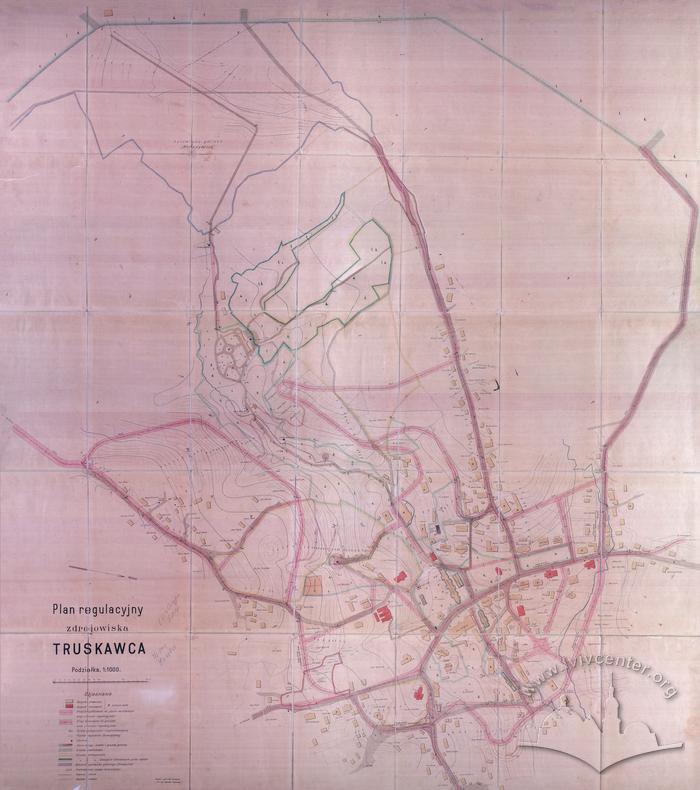 Regulation Plan of the Truskawiec Resort

The map outlines the early twentieth-century project of a new layout for the Truskawiec territory, detailing the street network, construction of new buildings, and laying of new green areas and recreational park zones.

Preparatory work on the creation of this "regulation plan" began on August 27, 1903, when a special commission of members of the Drohobycz District (Powiat) Department visited Truskavets to find out and research the conditions of regulating construction in resorts. Measurements for developing the map were undertaken then.

The chief purpose of creating a "regulation plan" was to outline paths for prospective new streets.

The map's toponymics include around 350 objects; the names are provided directly on the map.

The late 1890s were a time of rapid modernization and extensive new construction in the resort town of Truskavets, founded after 1827. New walkways were introduced at this time, the new Adamówka park was laid, and the sanitary condition of therapeutic facilities was greatly improved [60], p. 60, [62], p. 10, 12

In accordance with the regulation plan, the executive department of the resort commission tried to keep the density of construction in the central part of Truskavets at a minimum, making it an area of parks and recreation. It was proposed to ban coinstruction of villas and hotels in the territory of the park, and the adjacent central part of town in the future. However, new villas and sanatoria were being constructed on park land even in the late 1930s. For various reasons, most of these did not survive until the present day [60], p. 61.

The regulation plan provided the basis for a new park, laid in place of the old forested land. The park arose in 1908 thanks to the efforts of the gardener Józef Jabłoński, had the area of 3.5 hectares, and comprised four terraces [60], p. 60.

In 1909, the streets of Truskavets were illuminated by oil and gas lamps by Washington and Keetson [62], p. 12. For the convenience of people taking their cures, the mail, telegraph, and telephone station were moved from the Postój Hotel to specially allocated premises in the southern wing of the resort's Main Building, in the downtown area.

In 1911 the resort town of Truskavets was acquired by a new joint stock company "Truskavets streams," which was headed and co-owned by Rajmond Jarosz (1875–1937), speaker of the Drohobycz District (Powiat). It was Jarosz's energetic efforts that ultimately gave the town its true European appearance.

After the construction of a power plant in 1912, electric light was first available for illumination of resort buildings, private villas, and the territory of the park. The introduction of the sewage, new sidewalks, and regular railroad connections also belongs to this period [60], p. 61-62.

The street network of Truskavets was formed thanks to the implementation of the "regulation plan". New resort construction in the outskirts of the town also began at this time.