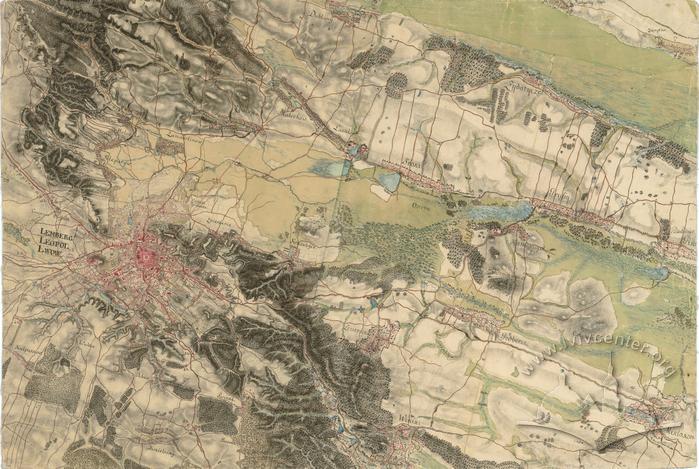 This map of Lviv is a part of the Map of the Kingdom of Galicia and Lodomeria (Karte des Koenigreiches Galizien und Lodomerien) was created in 1779-1782 for the military as part of the Joseph Topographical Survey of Galicia (Josephinische Landesaufnahme).

The topographical survey of Eastern Galicia was begun under the leadership of Field Marshal General Zeeher and continued under Oberleutnant Friedrich von Mieg and then under Major Waldau.

Unique graphic characteristics of this map include a detailed relief of the area, rivers, streams, ponds, fortifications around the city center, the High Castle (Vysokyj Zamok) and Low Castle (Nyzkyj Zamok) complexes and fragments of the Friedrich Getkant defensive walls from the middle of the 17th century in the Brody suburb. [12], p. 223

Toponymics on the map include nearly 100 objects; most are identified using special symbols.

The map shows the city, suburbs and outlying villages and rural areas of Lviv.

The schematic depiction shows Lviv before the beginning of a series of urban changes which began in the capital of the Austrian province of the Kingdom of Galicia and Lodomeria (Königreich Galizien und Lodomerien) at the end of the 19th century.

Among the important changes in the city, which can be seen on the map, is the start of demolition of the defensive walls and the Galicia-Krakow gate, which, starting in 1777, were under the management of Klemens Fessinger. [23], p. 64

The Monarchy’s new attitude towards religion had a significant influence on changes in the urban environment. This was evidenced by the secularization and closing of most religious buildings and churches in 1773 and 1783-85. Former monasteries were converted to hospitals, barracks, prisons, educational establishments and other facilities as required by the community. [74], p. 52-53

In 1781, after accepting the tolerant attitude of Protestants, Orthodox and Greek-Catholic faithful were allowed to celebrate liturgies. The Protestant community in the city received permission to use the St. Ursula Roman Catholic Church on Zelena Street. [74], p. 40, [23], p. 64

At this time a postal service was started in Lviv, rules were also implemented to govern the construction of new buildings and for keeping pet dogs.

The intensification of trade and economic transactions in Galicia led to the appearance of factories. Factories opened in and around the city: in Vynnyky, a tobacco factory (1779) and in Znesinnja a factory producing high quality Bachevskyj liqueurs (1782). [23], p. 64

An approximate number of buildings in Lviv can be gleaned from the writings of the educated traveler Baltasar Hacquet. In 1790 in Lviv there were nearly 2759 structures. [20], p. 30

The construction boom was aided by a ten year tax break implemented in 1774 for new and reconstructed buildings. [74], p. 30