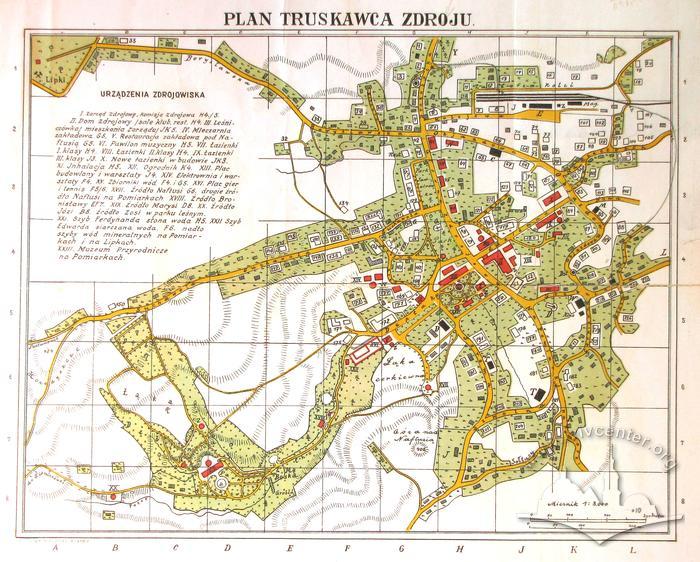 Plan of the Truskawiec Resort

This map of Truskawiec was published in 1933, as a supplement to an illustrated guide to the resort and its surroundings [62].

The plan shows the extent of constuction in the city, from the central part, to the surrounding territories. The network of main streets was almost fully formed at this point [60], p. 63.

The map was printed at K. Rogalski's Lithography and Printing House.

In 1911 Truskavets became the property of the "Truskavets Streams" Joint Stock Company, headed by Rajmund Jarosz. Construction of a power plant, and the introduction of the railway became key factors in the resort's development in early twentieth century. In the 1920s and 1930s much attention was given to increasing the town's greenery (the town was decorated with flower-beds and exotic plants), and improving the infrastructure for those taking their cures at the resort [62] p. 12.

The map shows the extant and projected construction, which allows the conclusion that over 70 per cent of the town's buildings were residential. Public buildings were usually located in the central part of Truskavets, along today's Drohobycha (then Łazienna), Bandery (then Główna Zdrojowa), Shevchenka, and Ob'yiznoyi (Objazdowa) streets. Construction began to go beyond the limits of the town center, and include today Drohobytska, Sukhovoli, Franka, Pomiretska, and Stebnytska streets [60], p. 63.