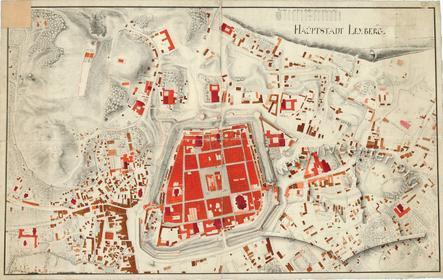 This is a hand drawn map of Lviv’s city center from 1777. It is one of the first maps of the city from when the city was under Austrian rule.

The author of the map is Josepho Daniele de Huber.

The special feature of this map is that it shows the city with the fortifications from the Middle Ages.

Characterization of the map:Map's toponymics:
Nearly 146 objects are included: List of publications where the plan appeared:Characterization of the city:
The map shows the city center with the defensive walls and parts of the suburbs. In 1772 Lviv became the capital of the new Austrian crown land called the Kingdom of Galicia and Lodomeria (Königreichen Galizien und Lodomerien).

Obtaining Capital status greatly influenced Lviv’s development. One of the most important catalysts for the urban transformation of Lviv was the demolition of the defensive walls, towers and gates around the city.

The liquidation of these Middle Aged fortifications started in 1777 under the leadership of Clemence Fesinger. The demolition debris was sold to locals as building material for low prices. This prompted locals to build new structures. [23], p. 64, [77], p. 115

The map shows the already liquidated segments of the Low (Nyzkyj) wall between the Jesuit gate and bastion I (Hetmanska), separate fragments between bastion II (Hrodska) and bastion III (Krakivska) and a section between the Krakivska gate and Small (Malyj) beluard. [12], p. 221

In 1773 Pergen, Governor of the crown land ordered that the Jesuit order be liquidated; this started the process of closing most monastic orders in the city. [74], p. 52

Very few buildings for public use were constructed in the 1770. The few that were included the educational establishment Collegium Pijary in the Brodiv suburbs (1776) and the wooden theatre led by Gottersdorf which, from 1775-1785, was located near the Jesuit gate (probably the building numbered 344). [74], p. 69, [77], p. 123