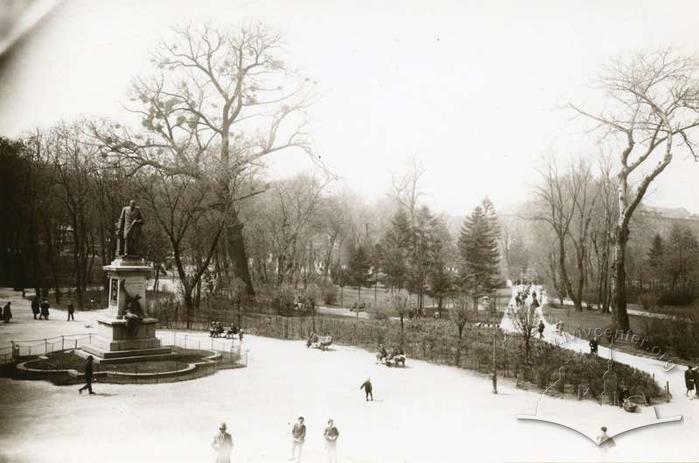 The monument to Agenor Gołuchowski

The picture shows the no longer existing view of the monument to the Count Agenor Gołuchowski, the famous Polish-Austrian conservative politician, longstanding governor of Galicia, member of parliament and Minister of Interior. The image shows the monument still standing in the city park (now FrankoPark) between the Main Alley and 3rd of May Street (now Sichovykh Striltsiv Street). From the end of the 19th century until 1921 the Main Alley did not exist. The monument to Count Agenor Gołuchowski was erected on June 28, 1901 on the expenses of the citizens of Lviv. It was one of the best monuments by Cyprian Godebski, a well-known sculptor and grandson of a Polish poet of the same name. The bronze figure stands on a high marble pedestal together with the allegoric sculpture "Galicia" giving alaurel wreath to the Count. Although the monument was perfectly designed it did not evoke reverence among the citizens of Lviv. It became a site of frequent anti-Austrian demonstrations. After 1944 the monument disappeared; its fate is unknown.