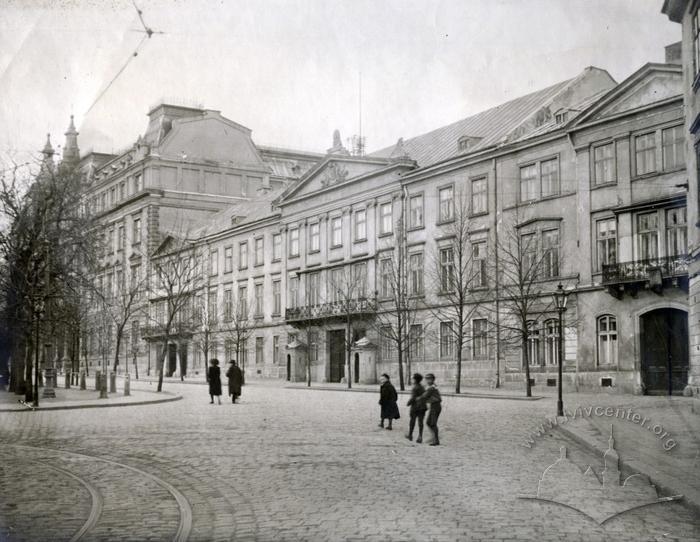 Building of the former Viceregency

Four storied building Viceregency on Charnets’kyi st. built in 1878 according to the plans of the Krakow architect Felix Ksenzhars’kyi. Next to it is located the Governor’s Palace (later Wojewodski), built in 1821 in the Classical style. Charnetska st. leads from Bernardynski square to Teatynska st., named in honour of Kyiv provincial administrator (“wojewoda”) Hetman Stefan Charnets’kyi. Until 1871 the start of the street was called upper Panska, the end part – Archbishop square. The Governor’s Bulwarks (until 1860 – Upper Bulwarks) was a boulevard on the site of old city fortifications between Charnetska (Vynnychenka) and Pidvalna streets. Long shady alleyways, planted with lindens, chestnuts, maples, took up a square area of 1.8 ha. This promenade, incredibly popular during its time, was created in 1816-1820 by the provincial advisor Wilhelm Raizenheim; the name – came from the governors’s palace built nearby in 1821. In 1894 a tram track was supposed to go by the residence, but to retain peace and quiet for the governor, the tram bypassed the boulevard and road along Pidval’na st.