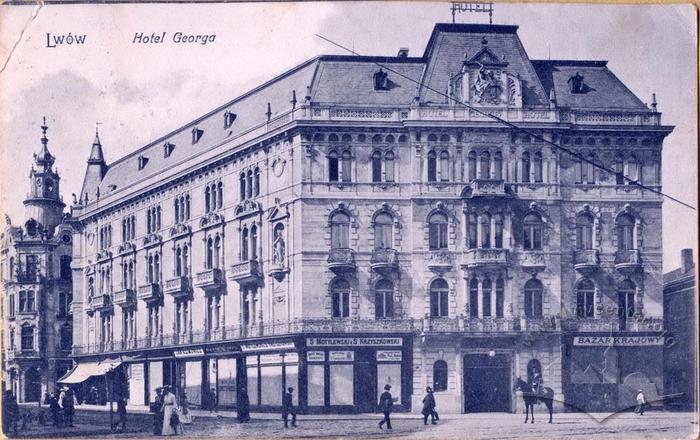 The postcard depicts the Neo-renaissance building of the George Hotel. The Hotel was built in 1900 following a project by the construction company of architects Ferdinand Fellner and Hermann Helmer of Vienna on the site formerly taken by an earlier hotel Russie, which was constructed by George Hoffman. The opening ceremony took place on January 8, 1901. The project was realized by the construction company of Ivan Levynskyi and Józef Cybulski of Lviv. The hotel stands at the intersection of what are today known as Liberty and Shevchenko Avenues. The building’s façade displays a bas-relief of St. George the Dragon-slayer by Antoni Popel and allegorical sculpures symbolizing Asia, Africa, Europe, and America by Leonardo Marconi. The postcard also depicts passers-by, a policeman on horseback, as well as store advertisements: Bazar Krajowy; S. Motylewski and S. Krzyszkowski; Jan Klimowicz.