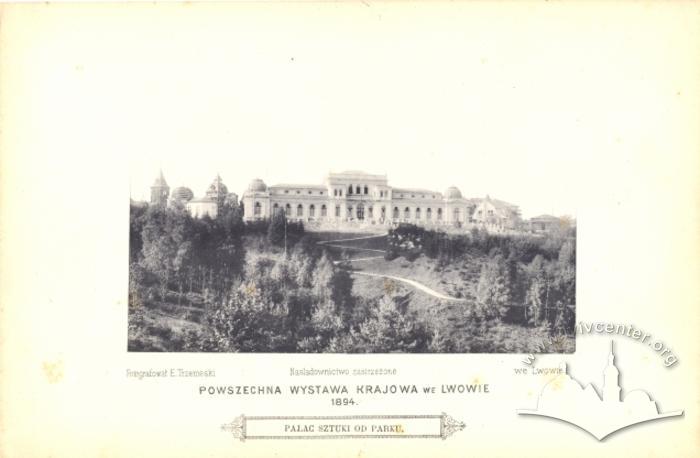 Palace of Arts during the General Regional Exhibition

A view on the Palace of Arts from the North (from Stryiskyi Park). In the center of the picture, a Palace with an area of 1,923 square meters, built in the Italian Renaissance style, based on a project by Franciszek Skowron (in accordance with the exhibition plan – pavilion number 111). According to the competition for the best project for the Palace, organized by the Exhibition organizers, Zygmunt Gorgolewski’s project appeared to be the best but was turned down due to its high cost. The realized project was planned by architect Michał Łużecki, an assistant of the Architecture Department at the Lviv Polytechnic School, junior assistant of the City Building Department Hryhoryi Pezhanskyi, and implemented by Stanisław Hołoniewski and Władysław Godowski. The Palace of Arts is the first Lviv building, especially set up for exhibitions. In front of the building, a winding alley, leading to a pond in the “valley” part of Stryiskyi Park, where the entrance from Pułaski Street is located (today Parkova Street). On the left side of the Palace, a private pavilion of 78 square meters, owned by gardeners Tomasz Kaczyński and Michał Woliński. Built in French Baroque style according to a Jan Peroś project (number 112) the pavilion was designed for exhibitions of products made from flowers, fruits and vegetables.