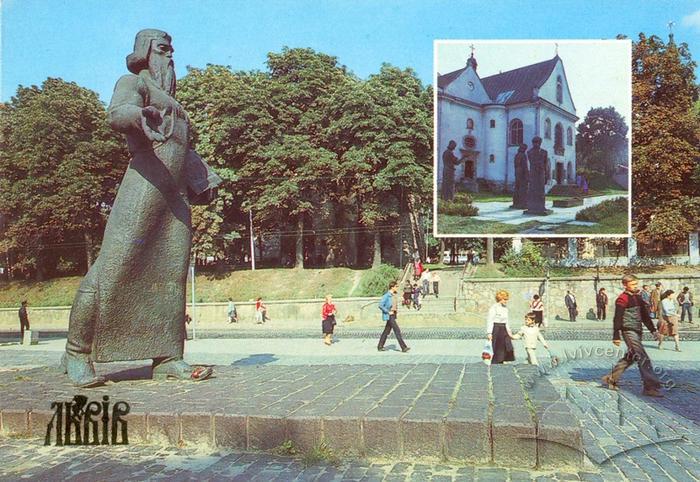 Monument and Museum of Ivan Fedorov

ID:
4860
Place
Lviv
Date:
1950-1980
Technique:
Postcard
Size of the resource:
Unknown
Creator
R. Yakymenko
Collection
Center for Urban History of East Central Europe
Copyright
Center for Urban History of East Central Europe
Publisher
R. Yakymenko
Description
The monument to the first printer Ivan Fedorov, author of the first Ukrainian printed books, was built and officially opened on November 26, 1977. The figure of the printer, which stands on a rectangleof dark cobblestone- is quite an untraditional artistic rendering for that time. The authors of the project were Lviv sculptors Valentyn Borysenko and Valentyn Podolskyi, the architectural planning was done by architect Anatoliy Konsulov. The monument was placed on a square, which was created after the reordering of the square at the foot of the Korniakto tower, between the entrances to the Uspenska church and the government archives of Lviv region, and the streets Pidval’na and Ruska. The backdrop is one of the most interesting sacral structures in Lviv- the Dominican church of the Divine Body, where in Soviet times the Museum of the History of Religion and Atheism was located (now the Museum of the History of Religion).
Tags:
Monument, museum, people
Category:
Monuments