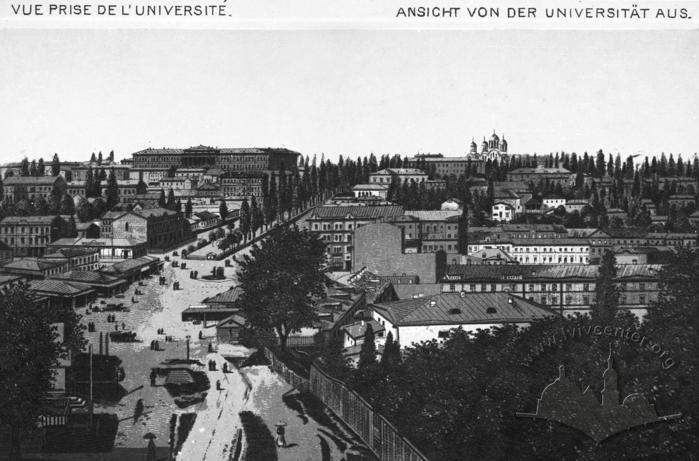 A postcard based on a drawing or a very retouched photo. A classic panorama of late imperial Kyiv with a view of the University main building from Kruhlouniversytetska / Kruty Uzviz street. A big number of similar photos, taken in the 1860s-1910s, affords an opportunity to trace back the process of urban modernization of Kyiv, as well as that of the waves of housing themselves. A characteristic feature of this panoramic perspective is the domination of the majestic structure of the University main building over the visually small and somewhat chaotic though regular housing of the lowland. Bibikovsky boulevard with poplars is present in almost all photos of this kind.

The retouched postcard depicts the transformation of the housing from the one-storied mansion type one to the several-storied row one. Unlike earlier pictures, the park area in front of the University cannot be seen in this photo, the fact indicating a stage of an active urban development. A few pavilions of the Bessarabsky market can be seen below; the newly built St. Volodymyr cathedral can be seen on the horizon line. Also, the fencing around the green belt of Bibikovsky (now Tarasa Shevchenka) boulevard is clearly seen.