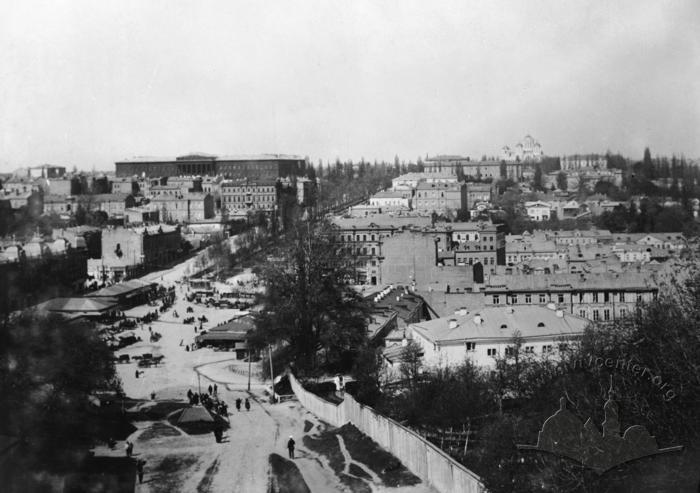 A panorama of Kyiv with a view of the University

A classic panorama of late imperial Kyiv with a view of the University main building from Kruhlouniversytetska / Kruty Uzviz street. A big number of similar photos, taken in the 1860s-1910s, affords an opportunity to trace back the process of urban modernization of Kyiv, as well as that of the stages of housing. A characteristic feature of this panoramic perspective is the domination of the majestic dark red structure of the University main building over the housing of the lowland. One can almost always see Bibikovsky boulevard with poplars in the photos of this kind, as well as the Bessarabsky market.

On the left, one can see the fashionable buildings of the National, Palais Royal, and Marseille hotels, which were built at the turn of the twentieth century. Below, there are a few covered pavilions of the Bessarabsky market without walls; just a few years later they will be replaced by a single large modern style pavilion with cold storage premises, arranged in the cellars. The St. Volodymyr cathedral can be seen at some distance, on the right side of Bibikovsky (now Tarasa Shevchenka) boulevard.