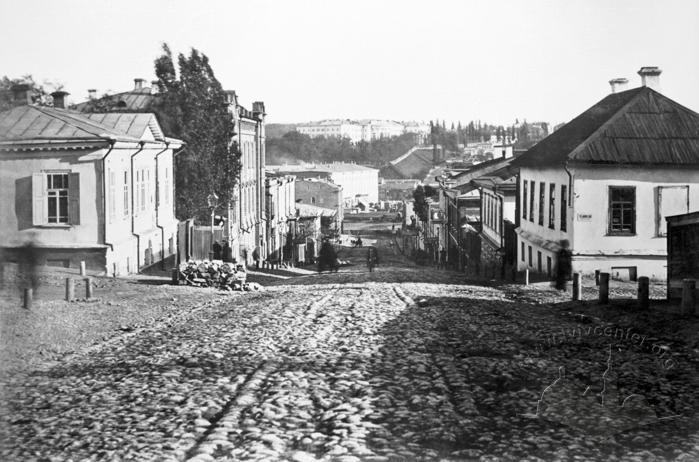 Sofiyska street in the late nineteenth century before the reconstruction of the early twentieth century. For the most part, the street consists of one- and two-storied residential houses. The road is paved with river stones; there is a gas post lantern and some firewood around it on the left; the sidewalk is separated from the carriageway by wooden or stone limiters. The Institute for Noble Maidens can be seen at some distance. The photo was taken at high exposure; consequently, an effect of diffuse silhouette can be seen in the figures of a man on the sidewalk on the left, a lady on the sidewalk on the right, and a cart in the middle of the road. In the foreground, one can see traditional houses with wooden shutters on the high ground floors. Some houses are still roofed with wooden shingles while others are covered with zinc-coated tin. Quite symbolically, one can already see here vertical rainwater pipes for draining instead of the so-called zhygachs. It can be seen that the process of replacing this housing with a higher (three-storied) and denser town one has been started.