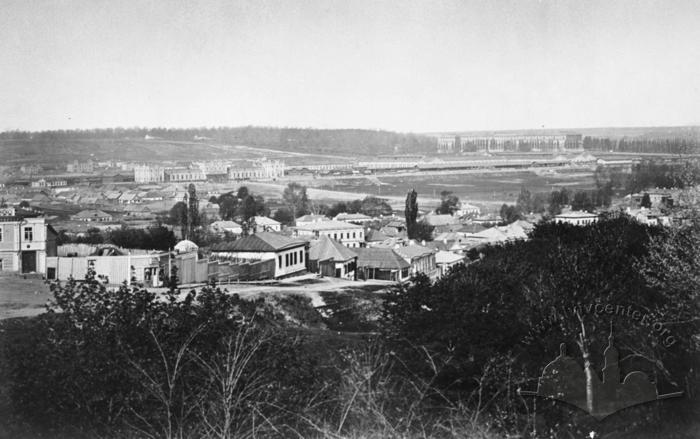 A view of the Nova Budova area

A view of the Nova Budova area in the second half of the nineteenth century. With the emergence of the train station and the St. Volodymyr university main building (1843) an active building up of Kyiv’s outskirts, located along the Lybid river, was started. The photo is taken from Shuliavska (now Lva Tolstoho) street. We can see private mansions on this street, as well as on Zhylianska and Mariinsko-Blahovishchenska streets situated farther. Till the end of the nineteenth century multistoried buildings – rented apartment houses for the most part – were built on their place. Farther, behind private houses, one can see the train station with its tracks, storehouses and workshops. Behind the train station, there are several public buildings of the so-called Railway Colony, as well as the hill of the Solomianka area, which was settled later. The Kyiv St. Volodymyr Military School can be seen at a distance on the left.