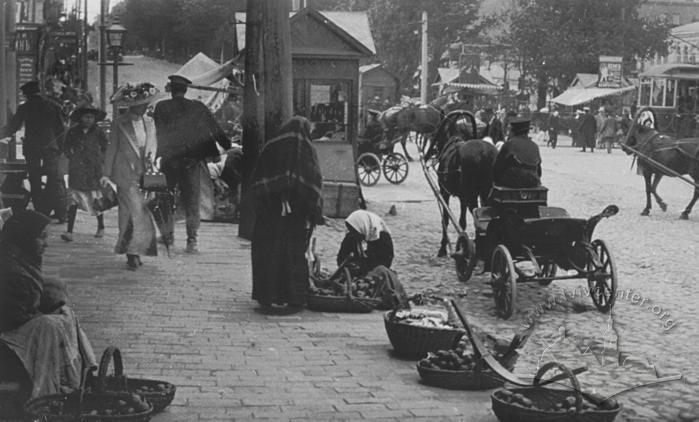 A photo depicting street trade, traffic and beautification at Bessarabka (view from the Palais Royal hotel, now Arena Plaza) toward Bibikovsky (now Tarasa Shevchenka) boulevard. In the foreground, peasant women are selling apples from baskets brought with a yoke. The image of the peasant women contrasts sharply with the image of an aristocratic lady who wears an elegant suit and a flowery bonnet and holds a little bag and an umbrella in her hands. A dynamic traffic can be seen in the carriageway, paved with cut stone; there are cabs and an electric tram there.

The Bessarabska square was lighted by gas lamps; on the sidewalk, there is a post lantern which had a cross bar for lamplighters to lean the ladder, brought in the evening, against it. One can also see that the sidewalk was paved with stone slabs. There is no kerb and height difference between the sidewalk and the carriageway. The street surface is rough; a gutter is made along the sidewalk for draining. One of the three decorated wooden stalls is situated on the road near the sidewalk, the other two can be seen at the entrance to Bibikovsky boulevard.

Street trade was conducted from 1874; a covered market pavilion was built in 1910.