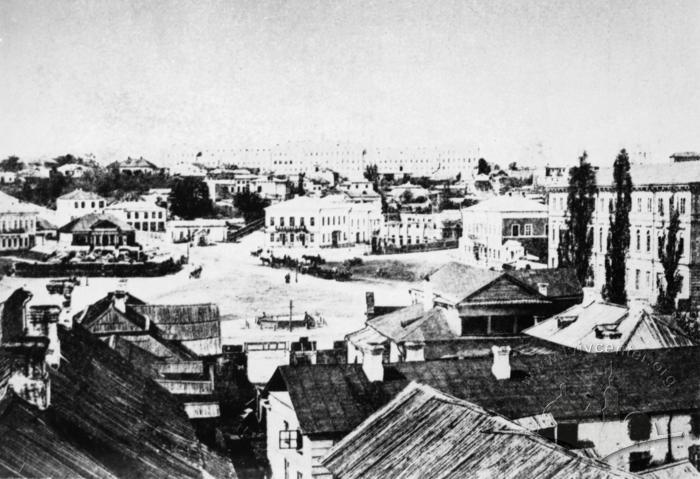 Khreshchatyk and the Dumska square

One of the earliest photos of Khreshchatyk street and the Dumska square (now Maydan Nezalezhnosti). In the center of the photo, there is a two-floor white house in the background; on the ground floor of this house, there was an establishment under a sign reading Photography belonging to Ivan Hudovsky. It must have been he who took this picture. Ivan Hudovsky was Taras Shevchenko’s mate at the St. Petersburg Academy of Arts; it was in this studio that he took famous pictures of his colleague. The house stood there till the 1970s; the Kozatsky hotel stands in its place now.

To the left of the studio, a house with a four-column portico can be seen; it was a mansion owned by Hudovsky. On the right one can see a three-floor building of the Nobility Assembly where a library was situated. On the horizon line, a huge building of some state institutions can be seen while to the right of it one can hardly see the silhouettes of the churches of the Tithes and of St. Andrew. The rest of the housing consists mostly of one- or two-floor buildings with roofs made of either zinc-coated tin or wooden shingles. Taking into account roofs made of zinc-coated tin, which can be seen in the picture, the photo can be dated to the 1870s or even to the 1880s.

One can also see the “Urod” fountain, which served for water intake in the mid-nineteenth century; however, after the City Duma (council) building had been built there, the fountain was transferred to a square behind the building, being also given an aesthetic function; now its place is occupied by the fountains of the Maydan Nezalezhnosti (Independence Square).