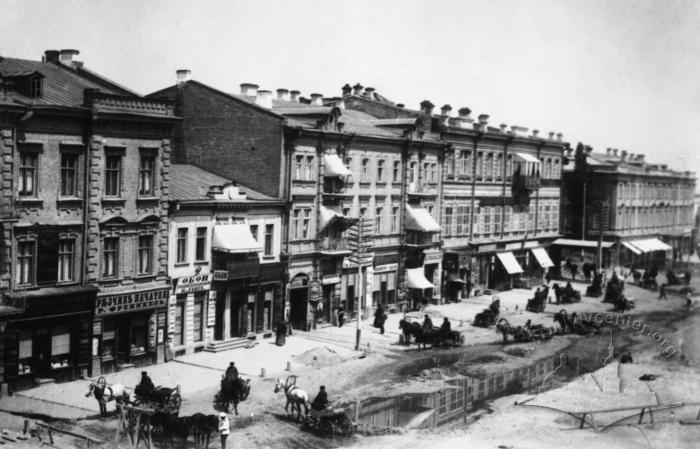 Parts of Khreshchatyk street which do not exist currently. The character of the housing indicates that the ground floors were occupied by shops and workshops (e.g., those producing seals or stamps) while the upper floors were residential. The buildings’ architecture is typical of the 1880s-1890s: they are constructed in the Historist style, sometimes having façades with rather rich plastic decorations and dormer windows. Over the balconies, there is a kind of draw linen curtains, the so-called marquees used for protection from excess light; it is one of the peculiar things here. The street is divided into a sidewalk and a carriageway by limiters; the both parts are located on the same level. There are many carts on the road, which are harnessed with a horse, as well as cabs; before the advent of trams and cars it had been the main kind of wheel transport, which, nevertheless, did not lose its popularity in the following decades. The façades of the buildings are reflected in the puddle, and this is an undoubted sign of the picture quality. Some poles can be seen on the street; most likely, they are meant for electric lighting but, for some reason or other, there are no electric wires on them; the process of installation was probably going on.