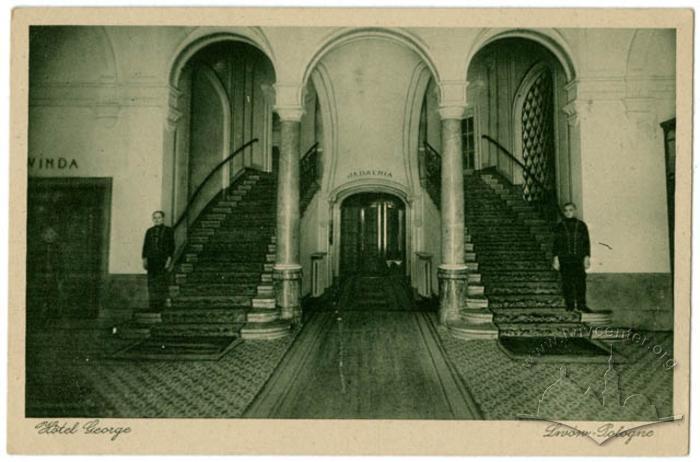 Lobby of the Hotel George

The photograph presents a relatively rare view of the interior of the Hotel George. The opening of the hotel – the largest in its time – took place on January 8, 1901. The George Hotel was consructed on the site of one of the oldest hotels in Lviv, property of the Hoffman family – the Three Hooks Inn (1793). In 1811 George Hoffman built the “De Russie” Hotel in its place, which was dismantled in the late nineteenth century. The new building was constructed by the Ivan Levynskyi and Józef Cybulski Construction Company, based on a project by architects Hermann Helmer and Ferdinand Fellner of Vienna. The new hotel had 93 rooms, of which 32 were apartments. The hotel offered its clientele telephones, central heating, hot and cold water and an electric elevator. The cost of a regular room varied between 6 and 12 złotys per day, while a deluxe room cost between 13 and 24 złotys. The first-class restaurant and coffehouse were very popular (the entrance to the restaurant is visible in the middle of the lobby between the two flights of stairs). Before the First World War the hotel became property of a union of private enterprises, while the concession for the hotel and restaurant was granted to the triumvirate of L. Pir, S. and M. Borowski and W. Orzechowski.