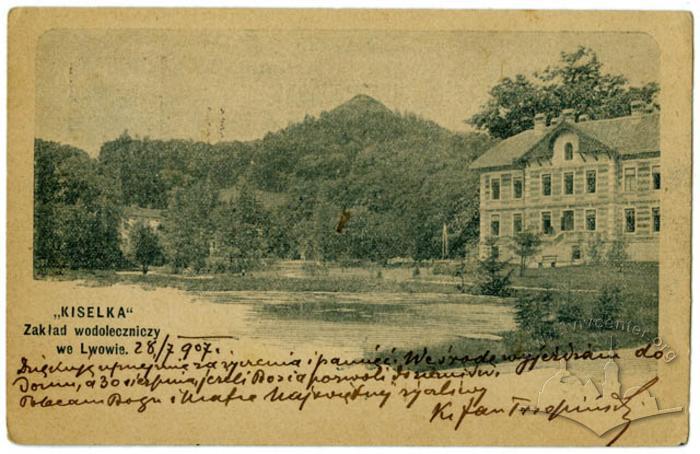 Kiselka was a dietological sanatorium and physiotherapeutic establishment in the territories of the former Paparówka in the north-eastern part of the city. The therapy institution was established in 1884, however hot baths existed here alongside the famous Kiselka Brewery as far back as the eighteenth century. The brewery was built by a pond next to the so-called “Garden of Health”. The brewing process produced high quantities of hot water as a by-product, because of which cheap bathing sites, or so-called “People's Baths” were established. There were many in this part of town, which fact was used by Karol Kiselka, the owner of the brewery. Even before the hydrotherapeutic institution was established, a traveler's guide to Lviv by S. Kunasewicz (1878) provides the price of 60 cents for a place in the horse-drawn carriage that would take the passenger “to Kiselka's baths, next to the amusement garden”. It is entirely possible that the establishment of the therapeutic institution was helped by the fact that Karol Kiselka worked at the City Council together with Dr. Edward Strojnowski. Dr. Strojnowski was an experienced medical doctor, as well as founder and first director of the Lviv ambulance station, and Kiselka's future son-in-law. The hydrotherapeutic institution occupied two two-story buildings by a pond at the foot of the Vysokyi Zamok (High Castle Hill). 120 to 150 patients were treated here every year.