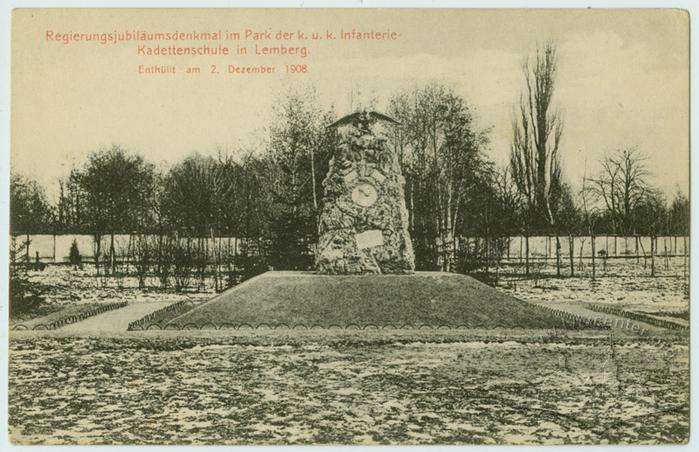 The pedestal of carved stones was constructed on a small mound of earth, covered with turf. The front side of the pedestal, which faces the main façade of the School, holds a round medallion with a profile of Francis Joseph. On top of the pedestal is a two-headed Austrian Eagle, cast in bronze. Behind the monument the brick wall of the Infantry Cadets School off Stryiska St. can be seen. The festive opening of the monument took place on the day of Francis Joseph’s accession to the throne on December 2, 1908. The students and professors of the Cadets School gathered in the square at 11 a. m., led by the school’s commander, Major Julius Wolny. Invited guests, and a division of the Lviv Garrison were also present. The ceremony began at noon. The military band played the national anthem, after which the people present marched in a festive procession before the picture of the Emperor. The ceremony was concluded by numerous salutations in honour of the monarch. The monument was in place until in 1918 relocated the Cracow Cadet Corps. No. 1 to the now empty houses. On February 2, 1922 the pedestal was turned into a memorial for cadets who lost their lives in fights against the Bolsheviks in 1919-1920, as well as in the Third Silesian Uprising of 1922. The memorial was finally demolished in 1939, after Lviv capitulated before Soviet troops.
Mykhailo Slobodianiuk