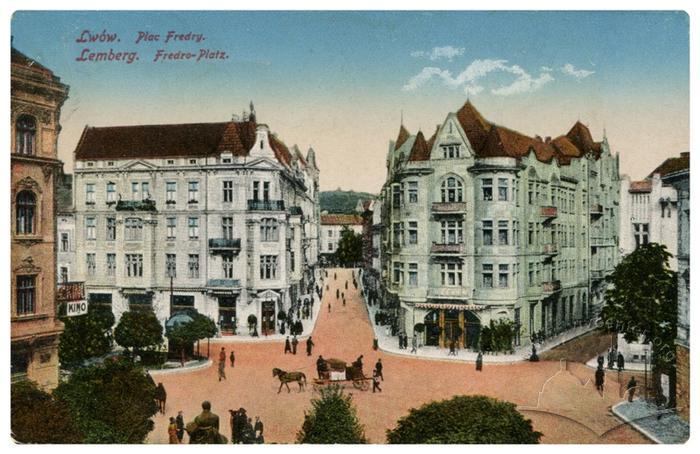 Postcard depicting the inofficial Aleksandr Fredro Square (today Shevchenko Boulevard). In 1871-1944 the place was called the Plac Akademicki, or Academicki Square. In the foreground part of the small park can be seen with an element of the monument to Count Fredro (1897, by sculptor L. Marconi). At the far left the building No. 28 in then Akademicka Street can be seen (constructed in 1897 by Jakub Bałaban). Beginning in 1912 the building housed the Corso Cinema. Left to right are: building No. 25 in Akademicka St., constructed in 1911 by Jan Schulz; view of Fredro St.; building No. 27 on the intersection of the former Fredro and Łozyński streets (constructed 1908-1909 by Zbigniew Brochwicz-Levynskyi), home to the famous Szkocka (Scottish) Coffeehouse in 1909-1939; view of Łozyński St, which was constructed in 1913 in place of the park, surrounding the Fredro Palazzo.