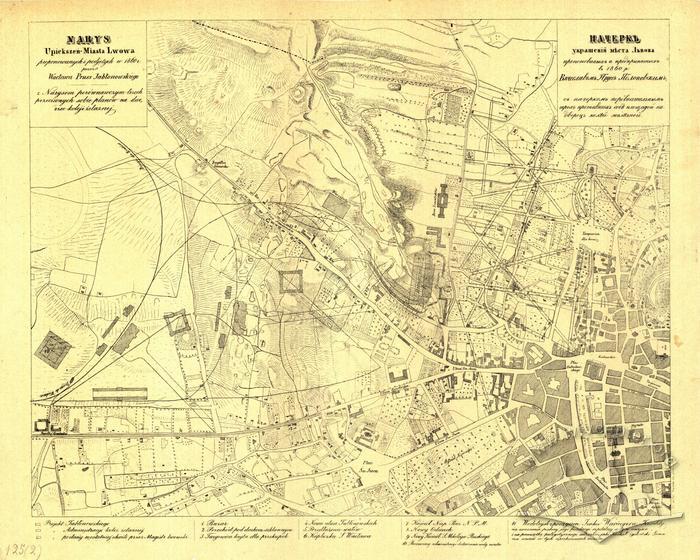 Drawing of the Decorations of the City of Lviv

The map shows the territory of the Krakow suburb, as well as some parts of inner city, and Halicz and Zolkiew quarters of Lviv.

The map dates back to 1861 and printed at the Lithographical establishment of Stauropegion Institute. The drawing of the map was presumably ordered by Waclaw Pruss Jablonowski, to demonstrate his construction project for a train station, which included the laying of railway tracks running through the city.

A peculiarity of the graphic execution of the plan is that it displays three different locations for construction of the railway station in the city.

The introduction of the railway in Austrian Galicia in the 1860s-1870s significantly influenced Lviv's urban development. In 1859 the recently established Karl Ludwig Privileged Society of Galician Railways was granted a government concession to establish railway connections to Lviv and Brody [44], p. 12; [45], p. 311.

Construction of the railway station began in 1860 in the same place, where today's station stands. In the course of construction, the city authorities pointed out a number of factors that spoke against the chosen site: it was situated in marshy grounds; excess water needed to be channeled along Horodotska St. into the river Poltva; finally, the buidling of the projected railway station would be 2.5 kilometers removed from the city center. As a result of this, alternative construction projects were presented, two of which can be seen on the map [45], p. 311.

One of the projects, submitted by the Karl Ludwig Society, proposed to situate the station in the area of today's Marka Vovchka St. Another project, authored by Waclaw Pruss Jablonowski, envisioned the construction of the train station by the Invalids House.

Despite the alternative proposals, construction continued at the site initially granted for it, and concluded on November 4, 1861. The railway route, connecting Vienna to Lviv was officially opened on the same day [45], p. 312.

There were 2,734 buildings in Lviv as of 1855. The late 1840s were characterized by intensive construction, with buildings constructed with greater numbers of stories, or rebuilt. The construction boom decelerated between 1851 and the late 1860s. [20], p. 31.