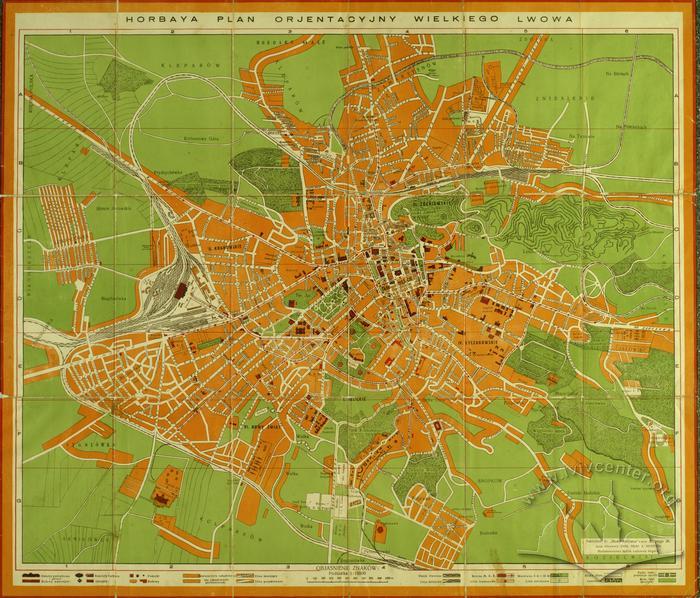 The plan was published together with a guidebook in 1931. The guidebook provides an alphabetical list of street and square names, trolley routes, important civic buildings etc. [55].

The graphic execution of the plan was undertaken by Vasyl Horbay - an engineer and board member of the Lviv-based "Dobra knyzhka" Publishing Institution", Ltd. [33], p. 208.

Publication was funded by the "Nowa Reklama" ("New Advertisement") Newspaper and Advertisement Bureau in Lviv. The map was printed at Adolf Hegedüs Artistic-Graphical Establishment (Zakład artystyczno graficzny A. Hegedüs). This printing house operated at 12, Rynok Square in 1897-1916, and moved to Sw. Michała (now Yuriya Drohobycha) St. in 1916 [27], p. 37.

April 1, 1931 saw the incorporation of several suburban territories into the city of Lviv. This doubled city area to 6,664 hectares, and created the so-called "Greater Lwow". The concept of city territory development was based on the labors of the regulatory committee of the city construction administration, and ideas by Ignacy Drexler and Tadeusz Tołwinski [49], p. 167, 171.

The need for large investment of capital into the urban development of new territories coincided with an economic downturn, noticeable in all Polish citions. The newly incorporated suburbs lacked pave roads, lighting, aqueducts and sewage systems [46], p. 72.

The most significant recent new construction in the city included the new trolley depot in Gródecka St. [50], p. 59, the Capucin Fathers Church of St. Francis of Assizi in Zamarstynów [54], p. 233, and the radio station in the grounds of the Eastern Market [51], p. 10. All three were constructed in 1930.

The present maps outlines the territory with the exhibition pavilions of the International Eastern Market, which took place every September and October, beginning from 1921. The exhibition area of the Market (which comprised 220 thousand square meters) included its own railway tracks with a cargo station and storehouses, as well as a post office with a telegraph and telephone, its own power plant, gas and water pipes [48], p. 152. From 1930 onwards, transport connection during the Eastern Market was provided by trolley No. 11, and the special "T" (from Targi, meaning Market) route. This reached the Eastern Market proceding from the Opera Theater through Galicki Sq. Bus connections were provided by two circle routes, "B", and "C" [50], p. 59, 61.

As of late 1931, transport links within the city were provided by:

Car races took place in the triangle formed by Pełczyńska St, Sw. Zofii Sq, Stryiska St. and Kadecka St. over the period between 1930 and 1933. The city allocated funds for road repair and reconstruction, as well as a prize fund to hold this competition. After the success of the first car race in Lviv (visited by circa 25 thousand people), the following races became international competitions [52], p. 75, 80, 83, 113.