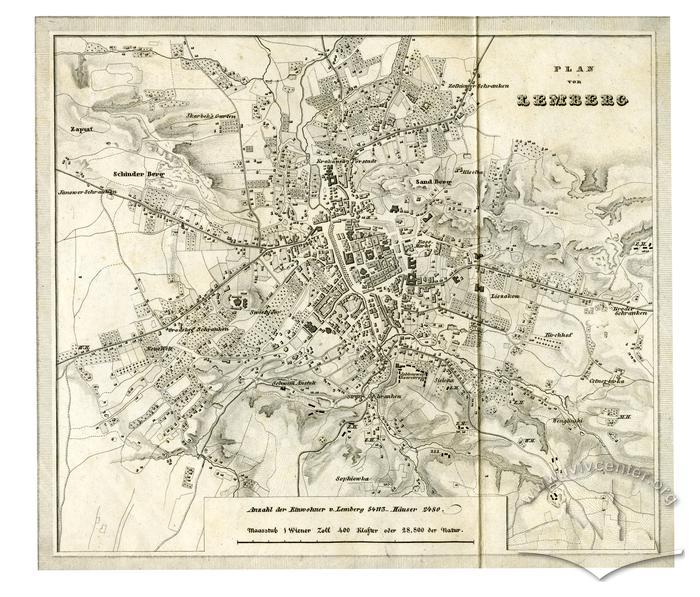 The present plan is part of a larger map of the territory of the Austrian province of Galicia, the "General Post and Road Map of the Kingdom of Galicia and the Cracow Region" (General_ Post_und Strassen Karte des Königsreichs GALIZIEN und des Krakauer Gebietes). The map of Galicia dates to 1848.

The plan shows the river Pełtew/Poltva as flowing free in part of today's Mitskevycha Square. Because the river was subsequently driven underground, we can approximately place the map as having been published no later than 1841.

The maps of Galicia included political and statistical information on the province, as well as small plans of Lviv. These were periodically printed at the Artaria & Co. publishing house, from the 1840s to the 1890s. The maps were approved fort printing by R. A. Schulz (gez: von R.A. Schulz), who, probably was the maps’ author.

The map's toponymics includes 30 objects. All names are provided directly on the map, next to the respective objects.

Artaria & Co. specialized in publishing and trade in three areas: art, music and cartography. The company was founded in Vienna in 1770, by the Italian-born Giovanni Artarias, together with his nephews Carlo and Francesco. In 1775, the company's premises were situated at 9, Kohlmarkt in Vienna [28] c. 30-31. In 1920 the Artaria map division became part of the Kartographische Anstalt G. Freytag & Berndt (Cartographical Company of G. Freytag & Berndt). In 1944 this was renamed "Freytag-Berndtu Artaria KG". The company still exists today

The I-st ("Cracow") and II-nd ("Galician") quarters had the most dense construction at the time. Together, these two districts held 49.7 % of all the buidlings in the city. The gradual growth of the quantities of real estate in the city, which began in the early 1820s, was brought about by the need for new premises for government and administrative offices and military buildings. [20], p. 30-31.

various-intensity gradients are used to mark the location's relief on the map;