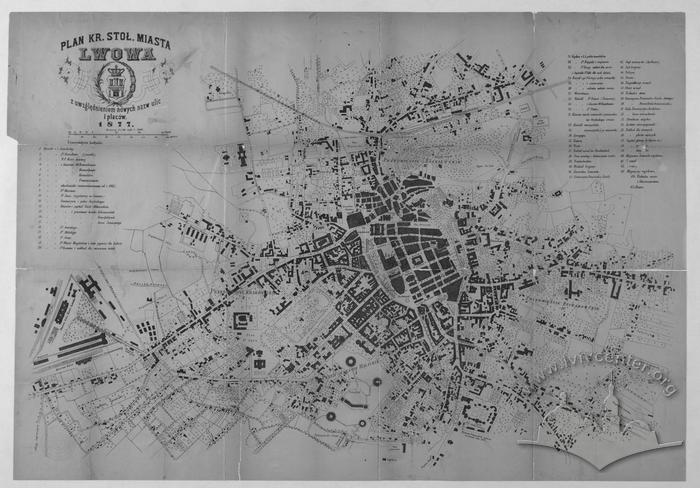 This map was printed to familiarize people with the recently renamed streets and squares of Lviv.

The map is dated 1877. The publisher is the Karol Wild Bookstore of Lviv; it was lithographed and printed by Kornell Piller Printers (Nakładem Karola Wilda. Lit i druk Kornella Pillera). This reprint includes a list of old and new street and square names (Plan kr. st. m. Lwowa ze skorowidzem dawnych i nowych nazw placów i ulic we Lwowie); it was originally printed in 1871 and first reprinted in 1872.

In 1881 the bookstore went bankrupt and the 20 000 book lending establishment was sold to Vladyslav Hubrynovych; Karol Wild, Jr. continued to run the establishment for another couple of years for the new owner. [33], p. 40-49

The unique graphic feature of this map is that pavilions from the First National Agricultural Industrial Exhibition (Wystawa Przemyslowo rolnicza) are shown.

The legend contains information about 65 objects; another 284 are labeled directly on the map:

On 14 December 1870 the charter giving Lviv Royal Capital City status was approved; this signaled the beginning of an era of autonomy in the city’s management.

In 1871 a resolution was adopted which ordered street names to be changed and the city to be divided into 5 districts. All buildings were re-numbered; odd numbered buildings appeared on the left hand side of the street and even numbers on the right. [31], p. 333

As a result of these changes the Karol Wild bookstore started distributing maps of the city with a list of old and new street and square names. These maps would have been in great demand as they were printed in 1871, 1872 and 1877. [12], p. 237-238

The map shows the result of the intensified building campaign that started in the early 1870s. Among the most important changes in the city’s landscape are:

The pavilion of the First Regional Agriculture and Industry Exhibition which ran from 6 September through 10 October 1877 on the territory of the Yablonovsky Orchards is visible on the map. The exhibition was an important event in developing an industrial sector in Galicia.  [31], p. 152-153, 715

In 1874-1876 there were 222 new buildings built and 285 permits issued for additions and alterations to existing buildings.