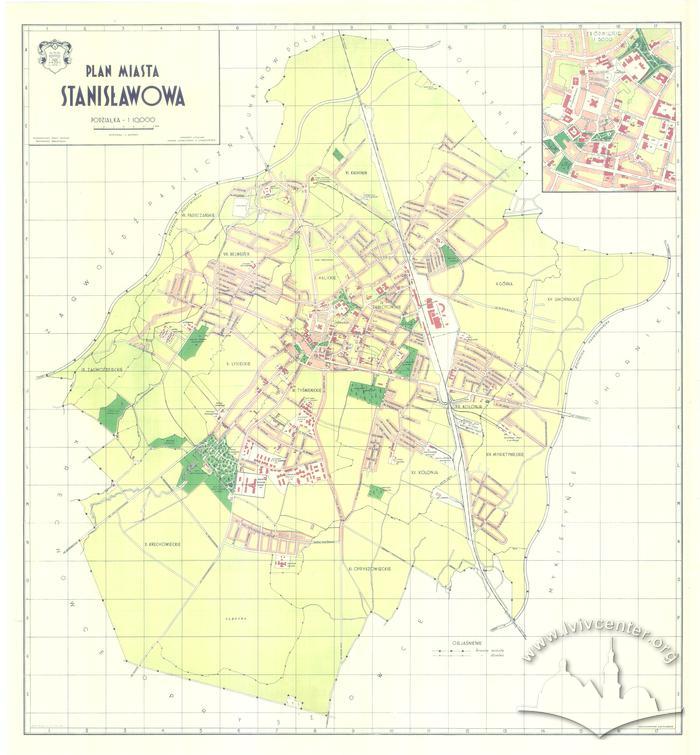 Plan of the City of Stanisławow

This map shows the territory of the city of Stanisławow (known from 1962 onwards as Ivano-Frankivsk), with 16 suburban quarters.

The map is not dated. The graphic execution of the map was undertaken by L. Siemek.

The map was reprinted at Piller-Neumann's printing house in Lviv.

The map's toponymics includes around 440 objects:

In the interwar Second Polish Republic, Stanisławow was the center of a Voivodeship of the same name (from 1921), and a district (Powiat), as well as the seat of a county court.

City territory was significantly extended in 1924-1925 through the incorporation of a number of neighboring settlements, that had gravitated towards the city, practically merging with it for some time. Thus, to the City Center, and the four original suburbs, were added Districts V – XV: Górka, Knihinin, Pasieczańskie, Belweder, Zagwożdzieckie, Krechowieckie, Opryszowieckie, Kolonja, Kolonja-2, Mykietynieckie, Uhornickie  [59], p. 13. As a result, the area of the city grew from 415.8 to 2227.5 hectares, compared to 1919  [40], p. 43/

In the 1920s the city, that had been strongly damaged in the First World War, saw renovation and reconstruction. The City Construction Committee was established within the city administration in 1925  [68], p. 71. Much attention was given to the widening of the sidewalks, maintenance of parks, green areas and street promenades, and the city's vegetated area was significantly increased. New streets were laid, including, among others, Dworska, Hoowera, Molotkowska, Pod Opatrznością Boską, and Kubisztala [59], p. 13.

Several comfortably equipped multi-storied buildings were built in the second half of the 1920s. Among these were the building of the Polish Association of Railway Workers, the Powiat Sick Bank, Dr. Gutt's Sanatorium, the Ursulian Nuns' School for Girls, the Public Works Administration, and others. The development of the city's industry intensified.

In 1929, a specialized "Ton" Cinema was constructed (known today as "Lumier"). In 1930 this became the first "talkie" cinema in the history of the city [38], p. 130. The city electric plant began operating in 1930, electrification of the city was in its concluding stages, and part of the city's sewage collectors began working.

The incorporation of suburban settlements significantly influenced the ethnic and denominational make up of the city, as, compared to 1921, the percentage of Ukrainians grew by 4.5 per cent, Poles – almost by 9 per cent, whereas the percentage of Jews declined by 15 per cent [58], p. 3.