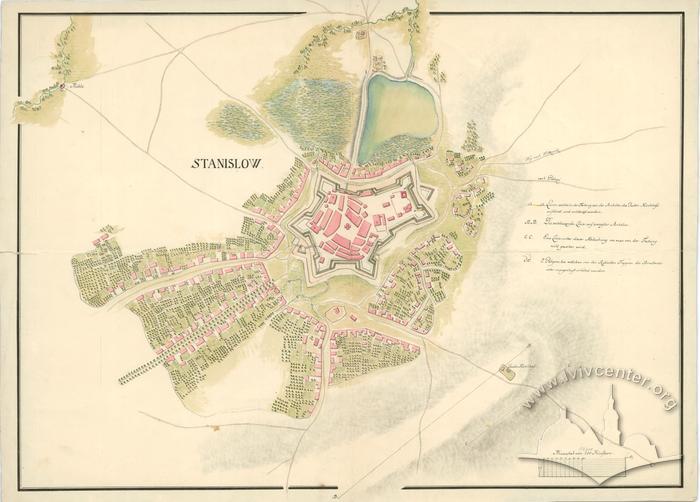 The plan reflects the state of the city and adjacent territories as of the late eighteenth century.

After the first Partition of the Polish Commonwealth in 1772, Stanislawow, previously private property of the Polish landowners’ family of Potocki became part of the Austrian Empire, and the center of one of 18 (later 19) districts of the province of the "Kingdom of Galicia and Lodomeria".

In 1792 Katarzyna Kossakowska, daughter of Jerzy Potocki and landlady of the town, who cared for the city for almost thirty years, sold the key to Stanislawow (which, apart from the city territory, included the Kniahynyn and Zahvizdia estates, as well as the villages of Opryshivtsi, Chukalivka, Uhryniv, and Krykhivtsi [56], p. 166) to her relation, Prot Potocki, who became the city's last landlord from the Potocki family. After his bankruptcy, from 1795 onwards the city was transfered into the care of the "United Liquidatory Committee", and in June 1801 the key to the city of Stanislawow was given to the Austrian treasury as compensation for Prot Potocki's unpaid taxes [40], p. 32, 34.

The walls were built of red brick, and the towers – of stone. Bulwarks and ditches, both deep and wide, stretched along the walls, dividing the city from its suburbs. Access to the city was provided by two gates – the Galician (or Lviv) from the north, and the Tysmenytsia (or Kamianets) from the southwest, as well as a small easterly gate, meant for strollers, and known as the Armenian or Zablotow gate. The gates were crowned by turrets of stone. [57], p. 19-20.

A planned liquidation of the city's defensive constructions began in 1812. [40], с. 32, 34. After the fortifications were taken down, the bulwarks were razed, and the ditches covered. Remnants of the bulwarks can still be seen between today's Hrushevskoho and Dnistrovska Streets, while a portion of the city wall can be seen from Novhorodska St. (Fortechnyi Lane).

Witnesses described the Stanislaw of the day thus: "This city is completely built of stone, its appearance wants nothing in comparison to foreign cities; it has a palace, a cit tower, an arsenal, and fortifications... A large monastery also existed here, as well as a wonderful Trinitarian Fathers Church with a glorious icon of the Saviour falling under the Cross. There was also a church of the Armenian nation, and Ruthenian churches; lovely buildings and tall stonehouses, wide and paved streets, rich merchants’ stores, Armenian stables full of horses for sale, and many decent factories" [56], p. 57-58.

According to ethnographer Mykhailo Holovatyi, the city had, as of 1801, 690 buildings, of which 144 stood within the fortress walls. By 1818 the city already exhibited 866 buildings, both residential and maintenance. Of these, only 84 were stone buildings [38], p. 10 .