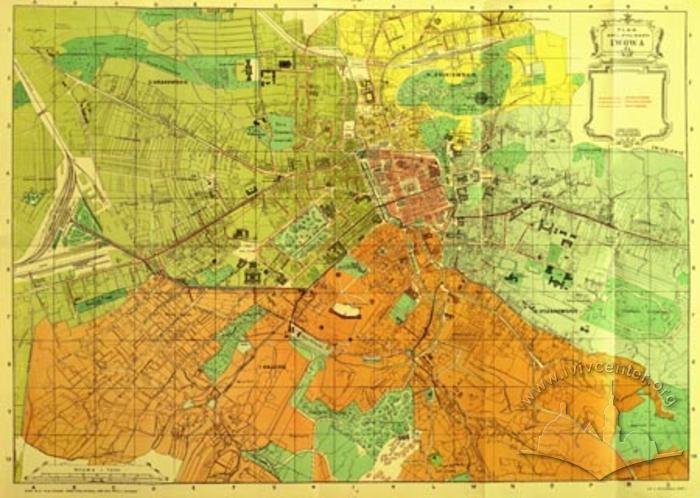 Plan of the Royal and Capital City of Lwow

This map of Lviv was an appendix to the publication “City of Lviv during Self-rule 1870-1895” (Miasto Lwów w okresie samorządu) published in 1896.

The drawing was based on the Royal Capital City of Lviv 1890 map with some changes and additions. The author was Adjunct Engineer at the Building Office of the Lviv Magistrate Jozef Chowaniec (Józef Chowaniec).

The City Council paid the cost of printing the map at the Antoni Przyszlak lithographers. This lithographic establishment operated in Lviv from 1883 through 1921; the final year of its operation it was run by Antoni’s daughter. In 1921 she sold the business to Knyzhnytsya Polska which later merged with the printers Hraphia and took on the new name Knyzhnytsya-Atlas [32], p. 15. It was located on Vynnychenka Street 12 [33], c. 217.

A unique feature of this map is that it shows where the city’s sewer lines lie.

The map of the Royal Capital City shows Lviv at the end of the 19th century.

Intensive development in the city led to the appearance of new streets.  According to the City Council’s resolution of 1895 there were 26 new streets laid. At that time there were a total of 227 streets and 27 squares in the city. [31], p. 316

In District I, near Novyi Svit, they started a residential construction project called Kastelivka with new streets, villas and stone buildings. The development of this site was initiated by Yulian Zakharyevych and Ivan Levynskyy and it influenced the modification of the western outskirts of the city. [31], p. 349

In 1893, after unsuccessful negotiations to expand the horse drawn tram routes, the City Council authorized Siemens & Halske to establish electric trams in Lviv. In 1894 two electric tram routes were inaugurated. The first route started from the train station and went through the city center to Lychakivska Street. The second route went from the city center to the St. Sophia School. During the Regional Exhibition of Trams, the second route continued from the St. Sophia School to the main entrance of the Exhibition. The company invested nearly 660,000 zloty to set up the electric tram lines. [31], p. 151-152

In 1894, the General Regional Exhibition took place on the upper terraces of Stryiskyi Park. The Exhibition had a large number of exhibits housed in over 129 special buildings or pavilions. They exhibited things associated with rural agricultural economy, industrial activity or small business. Special attention was paid to highlighting the arts, education and ethnography.