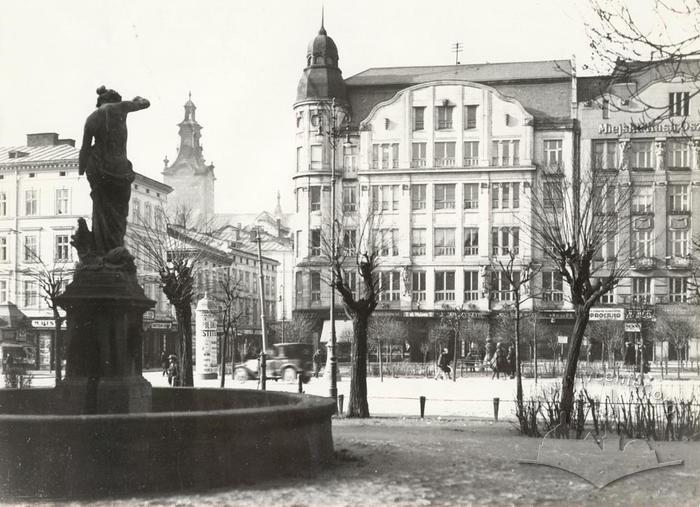 This photograph shows a view of "Halytsky" (Galician) Square from the side of the building of the District Court (Batoriya Street 1-3, nowadays a building of the Lviv Polytechnical University in Kniazia Romana Street. In the foreground there is a well with a fountain adorned by a sculpture “Svitezianka” (sculptor Tadeusz Blotnitcki) which stood here until 1950. In the background we can see one of the oldest houses on the square (beginning of the 19th. century) - № 2-3 on Halytsky square / corner Halytska Street. Also visible is the tower of the Latin Cathedral. In the center of the picture there are the houses № 7 and 9 inValova Street. № 7/ corner Halytska St., 21 was built in 1908-1910 by order of the owner Theodor Bałłaban after the project of the architects Alfred Zachariewicz and Józef Sosnowski. After World War I the municipal savings bank was located here and from 1931 this house belonged to the bank. Architect Wawrzyniec Dayczak reconstructed the interior and adapted it for the needs of the financial institution. House № 9 was also built according to the project of Alfred Zachariewicz and Józef Sosnowski. Sculpture decorations of both houses belong to the authorship of Zygmunt Kurczyński. In the interwar period the "Lvivskyi" bank was located in this building.