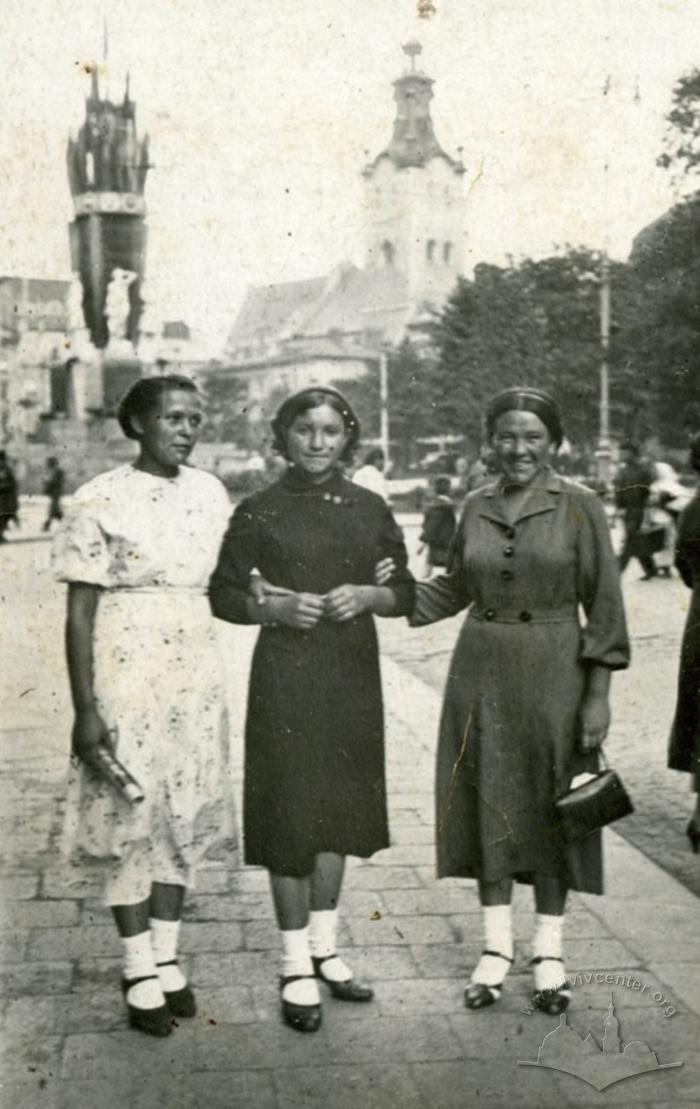 Monument to the Soviet Constitution

In the photo there is a group of women, probably personnel of Soviet establishments that were opened with the establishment of Soviet rule in Western Ukraine, from left to right: Halia Sydorenko, Musia Myrhorods’ka, Katia Khabibulina. Dressed in accordance with the women’s soviet fashion of their day they were photographed in September 1940 on Yahellon’ska st. (now Hnatiuka st.), the backdrop is the monument to the Stalin constitution, put up at the end of 1939 on the “island” between Hetman embankments and Holy Spirit square (now I. Pidkovy sq.). The sculptors Yevhen Dzyndra and Andryi Koverko carried out the project, but the participation of Lytvynenko’s student the young sculptor Yakov Chaika is also a possibility. The monument was made in the ceramic-sculpture factory, which opened on Muchni st in 1939. The temporary monument, made of cement on a wooden skeleton, presented a huge vertical composition in the image of a column, fitted with red flags. In the lower part there were figures of a Red Army man, worker, mother with child, students and an old Hutsul with a boy. The cement figures and signs in Ukrainian, Polish and Hebrew symbolized the brotherhood of nations in accordance with the articles of the Stalin constitution. On June 30th 1941, German armies took over the city. Was it but not on this very day that the cement monument was broken and its pieces poured into holes and hollows which had been caused by the German bombardment of Lviv.