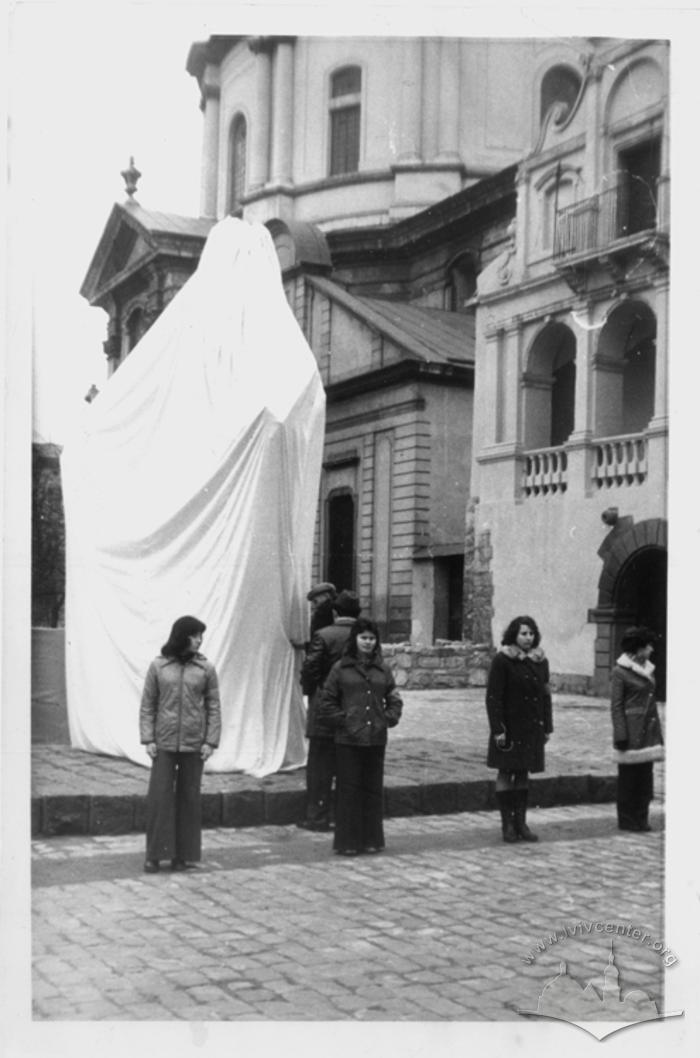 Opening of the Monument to Ivan Fedorov

In the picture, the ceremony of the grand opening of the monument to Ivan Fedorov. A white cover is being pulled off of the figure of the printer, near him «honourable sentry» of students of the Ivan Fedorov Ukrainian Institute of Polygraphy. The idea of building a monument to the first ukrainian printer Ivan Fedorov first appeared in 1947. In May 1958 the Lviv Regional Council of Labour Deputies chose the square, located near the ancient King's arsenal on Pidval'na st as a place for the monument. In 1963 the discussion of the installation of the monument was continued by the head of the regional board of culture Yaroslav Vitoshynskyi, who turned to city party members and members of government bodies about settling the question of establishing, a pedestal base of the premier printer's bust on one of the squares of Lviv before May 1964. In 1964 it was 400 years since the appearance of the first book printed by Ivan Fedorov in Moscow. The artistic and intellectual community of Lviv submitted its proposals about celebrating this date to the first secretary of the Lviv «obkom» (regional committee) KPU, V. Kutsevol. There was a memorial exhibit organized in the Lviv Museum of Ukrainian Art and the Lviv government Institute of Polygraphy of Ivan Fedorov, a scientific conference held in the city, and publications about Ivan Fedorov and bookprinting prepared. And the topic arose once more of establishing a monument to the first printer with the goal of its construction in 1974- in the year of the 400 year anniversary of the appearance of bookprinting in Ukraine. The realization of this idea took three years- its official unveiling took place on November 26th, 1977 in the square between Pidvalna and Ruska streets. The creators of the monument were Lviv sculptors Valentyn Borysenko and Valentyn Podolskyi with the involvement of the architect Anatoli Konsulov. The work was carried out by the workers of the government historical-architectural national park, board Rembudmontazh», Lviv special scientific-restoration workshop, PO «Prykarpatpromarmatura», miskrembudtrest, Lviv ceramic-sculpture factory, students of the Ukrainian Institute of Poligraphy named after Ivan Fedorov. The celebratory meeting was opened by the first secretary of city KPU Heinrich Bandrovs'kyi.
Valentyn Kleiner found this photograph in his family archives and graciously donated it to the Centre for Urban History, for which we thank him.