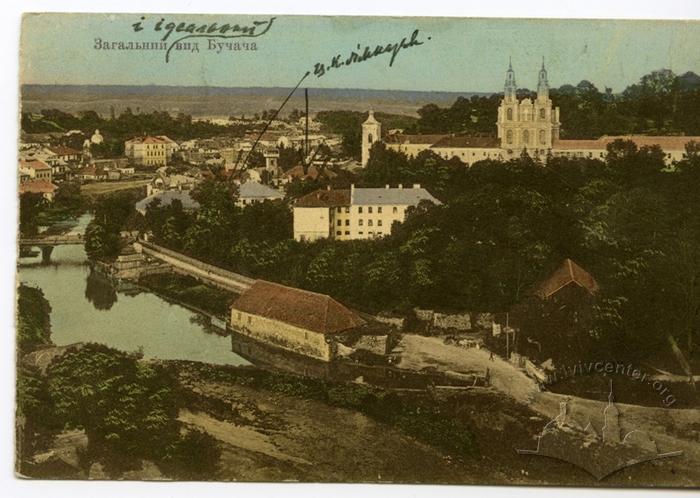 View of the City from Castle Mountain

A panorama of the city from Castle Mountain. In the foreground one can see the Strypa River and part of the embankment with buildings. On the right, on the slopes of Fedir Mountain, the buildings of the Greek Catholic Basilian Monastery can be seen. The central building of the complex is the Church of the True Cross, which was constructed in the late Baroque style according to the project by a well-known architect, Schilzer, on the site of a cathedral disassembled in 1752-1761. According to the project by well-known architect Gottfried Hoffmann – the creator of the Pochaiv Lavra – two-story monastery premises (on the left) and the school education building (on the right) were added in 1761-1771. In 1804 a gymnasium was founded at the monastery of the Basilian friars; well-known Ukrainian and Polish personalities of the spheres of culture, literature and art studied here. Poets Julian Dobrylowski and Illarion Grabowicz as well as biologist Semen Trush were among its teachers. A trade and craft school also existed at the monastery. A bell tower built in 1849-1854 is located to the left of the monastery premises. The buildings of the state gymnasium are located between the monastery and the bridge over the Strypa River; they were constructed in 1891—1899 according to the project by Topolnicki and Ferrari. The historian Ivan Dzydzora, artist Volodymyr Lasowski, writer Osyp Nazaruk, and Sich poet Ivan Baliuk studied here. The outlines of the Church of the Protection of Our Lady – built in 1764 – are in the background on the left side of the image. A number of historians believe that the church was constructed according to the project by German architect Schilzer. He was the author of Christ Uplifting Church for the Basilian Monastery and the new palace of M. Potocki in the southwestern part of the city. Despite that, the majority of art scholars connect its construction with the well-known architect Bernard Meretyn. The Church of the Protection of Our Lady was the last creation of B. Meretyn and the sculptor J. G. Pinzel in Buchach. In 1865 the church burned down but was renovated and operated until 1956. In 1990 the Church of the Protection of Our Lady was passed on to the Greek Catholic community.
Nazar Kis

Tags:
View of a part of a city from the castle mountain, Strypa River, embankment with buildings, Basilian Monastery, the Church of the Protection of Our Lady and gymnasium
Category:
Panoramas