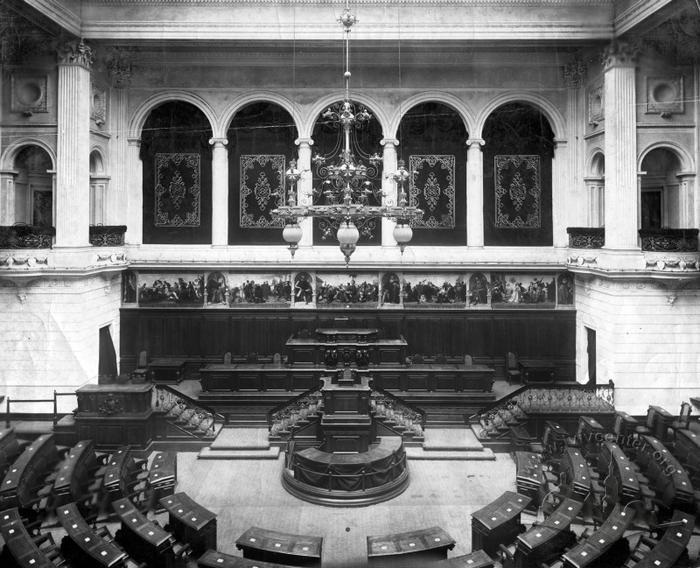 The building of the Galician Sejm was built by the well-known architect Juliush Hokhberher in 1877-1881 in the period of the active building of Lviv during the epoch of municipal self-government. The plots of land of the lower parts of the ancient Jesuit or post-Jesuit park, on the spot of the ancient Casino Höchta were used for the construction of the Parliament building. The decorating of the building was conducted by the best sculptors and painters of the day: Theodore Rygier, Zygmund Trembecki, Henrik Rodakowski, Jan Matejko, Henrik Siemiradzki, Kazymiersz Pochwalski. The second storey of the Galician sejm building held the meeting hall, outfitted appropriately as an exemplary contemporary parlaimentary building. The half-circular amphitheatre of the hall was covered by a glass ceiling and was planned for 230 seats for deputies – consuls of the sejm. The half-circle of the amphitheatre faced the front wall, decorated with an allegorical painted freize by Henryk Rodakowski. Tiers of platforms were built into the length of the wall for the head (Marshal of the sejm), and also for the technicians (stenographers, secretaries) and reviewers. The central point of the composition was the platform for presentations. Along the perimetre of the parliamentary hall’s rounded wall there were boxes marked for the public. The hall was decorated by a thematic painting by Jan Matejko entitled “Union of Lublin”. Thanks to the glass ceiling the hall used natural light for illumination, and in the evening – gas lamps. In 1881 the lodging of the sejm received electrical lighting, which was first used in Lviv by engineer Francishek Rychnowski.