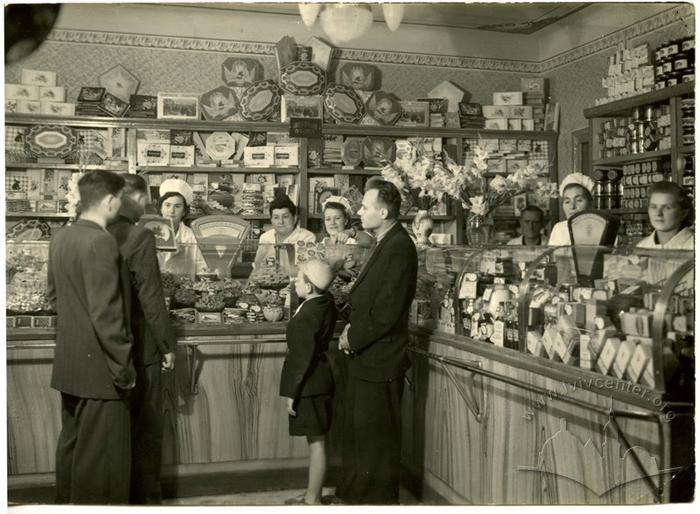 Confectionary department of the grocery shop

In the photograph- a typical interior of a 1950s Lviv grocery shop. This shop was located on the corner of I. Franka square and Rustavelli st. In the 1960s the building was markedly rebuilt and expanded in the direction of Rustavelli st. and already included a cafeteria, now this place hosts the shop “Dary moria” (gifts of the sea). On the left the confectionary department is located, on the right- the grocery department. The interior of the shop- is quite typical for early soviet times: rounded show windows, full assortment of goods; lamps; on the abutment of the show windows of both departments stands a vase with gladiolas- such vases, styled along Kosiv lines, were made in the Ivan Levynskyi factory until WWI. On the shelves of the confectionary section stand boxes with candies- 18 different kinds- products of the then excellent Kirov factory (earlier confectionary factory “Branka” of Maurice Brandshtadter, later of the company “Svitoch”). Under the rounded glass of the show case there can be found a rich assortment of confectionary products for that time: chocolate in plates “Sport”, “Dorozhnyi”; marmalade figurines, coloured triple-layered, caramel puffs of different sorts (the favourite candies of little children), chocolate candies. On the right- display case of the beverage section, in which we see a typical assortment of products of that time. In the display case innumerable sorts of erzats-coffee, tubs with jelly, packages with “Toloknom”- oat flour, from which a decent meal could be made for infants, packages with tea, black and fruit, cornflakes. Behind the counter stand sellers pleased and interested with the photosession. After several years, the selection will change somewhat, irregularity with product availability will begin, characteristic of 1960-1961, long queues will form for bread, which will be baked with added corn or rye flour; breakfasts for children will be organized in schools - a glass of milk and a bun of white flour, but people in the shops do not yet know of these changes which will happen in society, and therefore nostalgic memories of full display cases and fantastically low prices still abound.