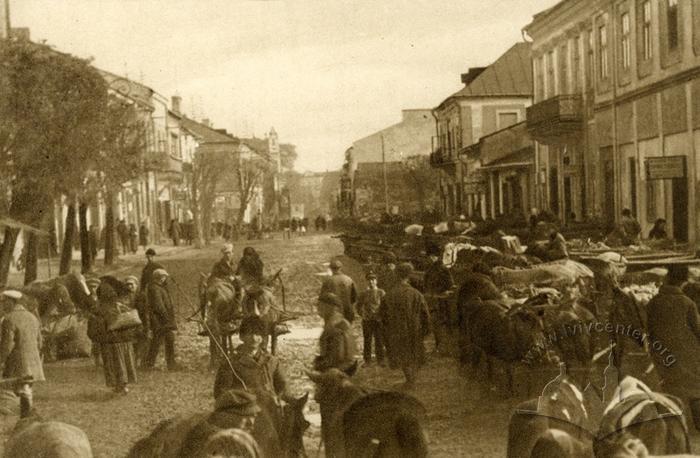 The picture presents a view of the northern side of the Rynok (“Market”) Square – the so-called Rynok A. The large numbers of people in the square, as well as the many carts standing by the buildings to the right, point to the fact that the photograph was taken on a market day. The Rynok Square was the heart of the city’s economic life for a long time. In the mid-nineteenth century, the square included about 200 buildings with roofs covered by copperplate, or brick tiles. To the left in the postcard are the two-storey buildings of the northern side of the Rynok square (today, after renovations, these buildings are four-storied). To the right is a two-storied building (also four-storied today), followed by a single-storied structure (no longer exists today), and a square two-storied stone building, that today is home to the Brody city council. The first stories of the buildings in Rynok square had historically housed shops (as evidenced by advertisements), while the second stories served as the owners’ residences. Further along the lines of the picture’s perspective is Złota/Zolota street (known at the time the photograph was taken as Ulanów Krechowieckich, «Krechów Uhlans»), and in the background, the fronton of the building of the Brody Gymnasium (school, 1883) can be seen. A single three-storied structure with a corner entrance and fronton stands out among the buidlings of the Ulanów Krechowieckich street – the building of the Bristol Hotel (1909).
Vasyl Strilchuk