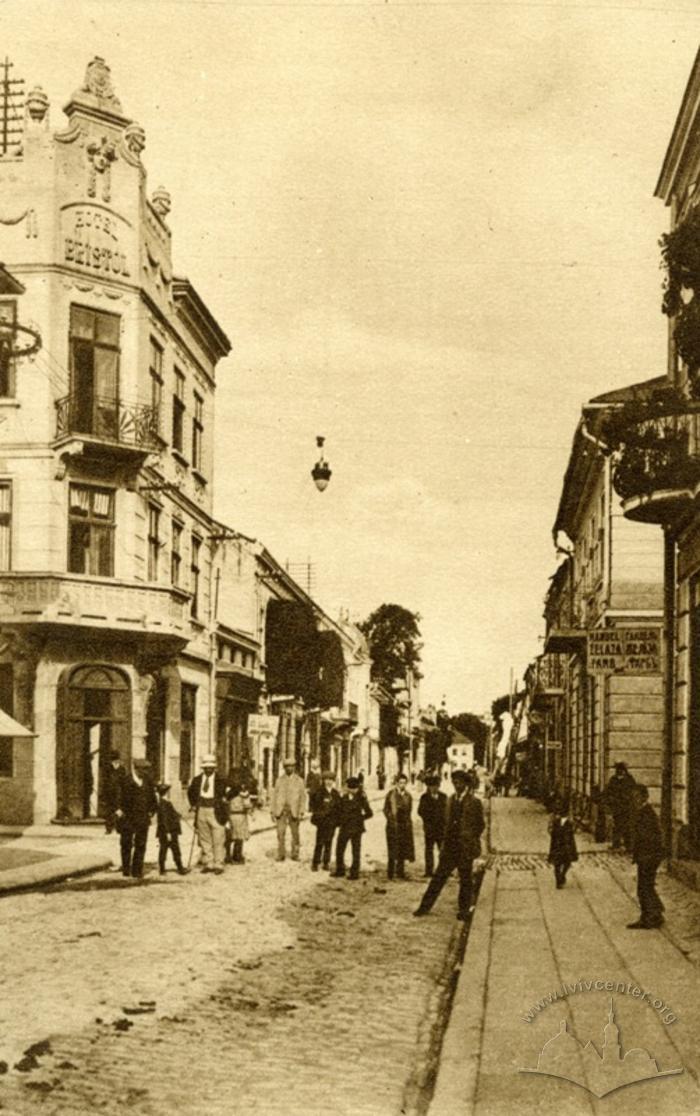 Ulanów Krechowieckich (“Krechów Uhlans”) Street was the name of today’s Zolota (“Golden”) Street in Brody in the interwar period. Named in honor of the Polish Uhlan Regiment, which, in 1917 became famous due to its battle against the Austro-Hungarian troops by the village of Krykhivtsi (today’s Ivano-Frankivsk region). The street was known under different names in different periods: Złota/Zolota (“Golden”) from the seventeenth through the nineteenth century, Stefanii in the late nineteenth and early twentieth century (Franz Josef Gasse is also mentioned), Złota/Zolota again in the early twentieth century, Ulanów Krechowieckich through the 1920s and 1930s, Adolf Hitler Strasse in the years of the German occupation, and Lenina in Soviet times. The street was given its historic name, Zolota, again in 1991. Historically the street was home to the city’s wealthiest residents. The street contained mostly two-storied houses, the first stories of which were taken by shops, and the second stories – by the owners’ residences. Among the buildings that are still there, is the three-storied building of the former Bristol Hotel, seen to the left in the postcard. The hotel was constructed in 1909 on the corner of Złota and Cukra (now Schurata) Streets in Modernist style. The building is decorated by allegorical motifs and figures of Atlantes, who support the second-storey balcony. The building’s main (corner) fronton was crowned by a monogram of letters “M.Z.B.” (apparently, the owner’s initials), and a mascaron with the face of Venus, the Roman Goddess of the morning star. The hotel had room for 16 visitors, the building’s first storey housed a restaurant. Futher beyond the hotel, past a single-storey building, a two-storied building can be seen, its balconies covered with ivy – this was the building of the bookstore owned by publisher Feliks West (1846-1946). Advertising billboards hang on either side of the street, on the buildings. A group of people is standing at the intersection of Ulanów Krechowieckich (Zolota) and F. Cukra (V. Schurata) streets.
Vasyl Strilchuk