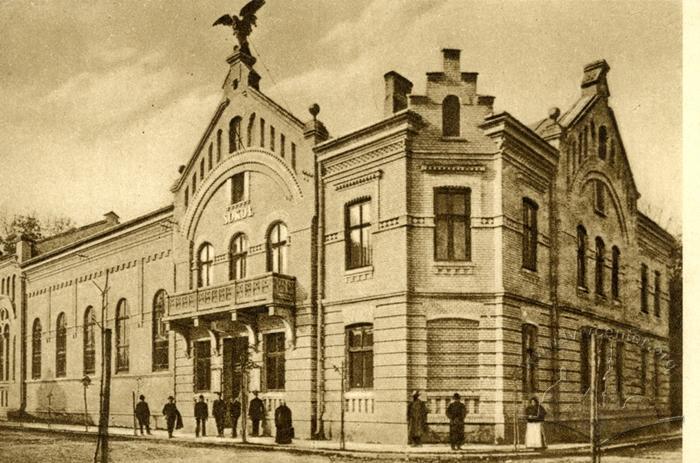 "Sokoł" ("Falcon"), the Polish sports society, was founded in Brody in 1891. The organization’s chief objectives were the promotion of sports, and cultural and educational activities. Initially the society had no premises of its own, and used the premises of "Gwiazda", the handicraft society. The "Sokoł" building was constructed circa 1904-1905, and began housing Brody’s first cinema in 1912. The fronton of the main façade concluded in a sculptural figure of a falcon (no longer extant today), the symbol of the "Sokoł movement". The main entrance faced the Wały Gimnazyjne ("Gymnasium Bulwarks") street (today’s M. Kotsiubynskoho street). A library, founded by the famous bookseller and publisher Feliks West of Brody, functioned in the building. South of the building was a small summer playground, which served as a skating rink in winter. In the years of the German occupation (1941-1944) the building housed a cinema for Germans. After the war, the building was used as a Soviet district "Culture House". Today it houses the Brody district National House (7, Kotsiubynskoho St.).
Vasyl Strilchuk