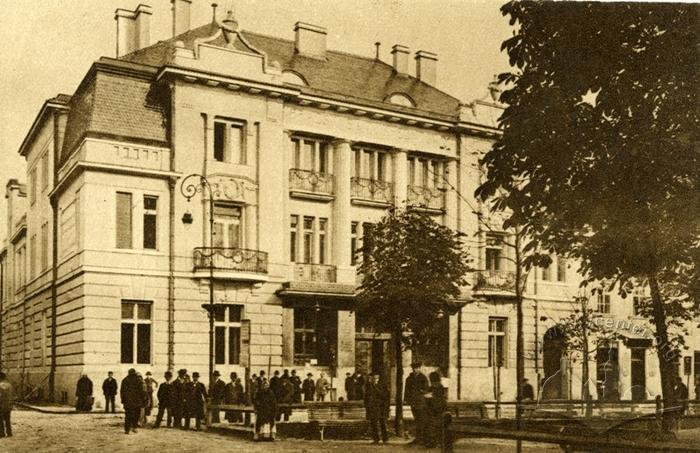 Building of the former Prague Bank

The building of a branch of the former Prague Credit Bank was constructed in 1911 in the northern side of Sobieskiego Street (today Svobody Square). Architect unknown. The institution was active until the outbreak of the First World War. In 1920, during a war with the Poles, the Soviet troops took Brody, and the building of the bank housed the Revolutionary Committee of the Brody County. In 1921 the owner of the Prague Bank put the building up for sale. The Ukrainian community led negotiations to acquire this building for their National House, but, for unknown reasons, this did not happen. Until 1939, the building of the former bank housed the Command of the District Cavalry Brigade, headed by General Władysław Anders, the famous Polish military figure, from 1926 through 1937. After the Second World War, the building became home to the Brody District Communist Party (Bolshevik) of Ukraine (RKP(b)U, in its Ukrainian acronym), and from the 1970s to the present the building housed the district police department and court. This massive building is on the State Register of Architectural Landmarks and is a jewel of Brody. The northwestern corner of the city park, known as Raykivka, and a group of people, can be seen in the foreground.
Vasyl Strilchuk