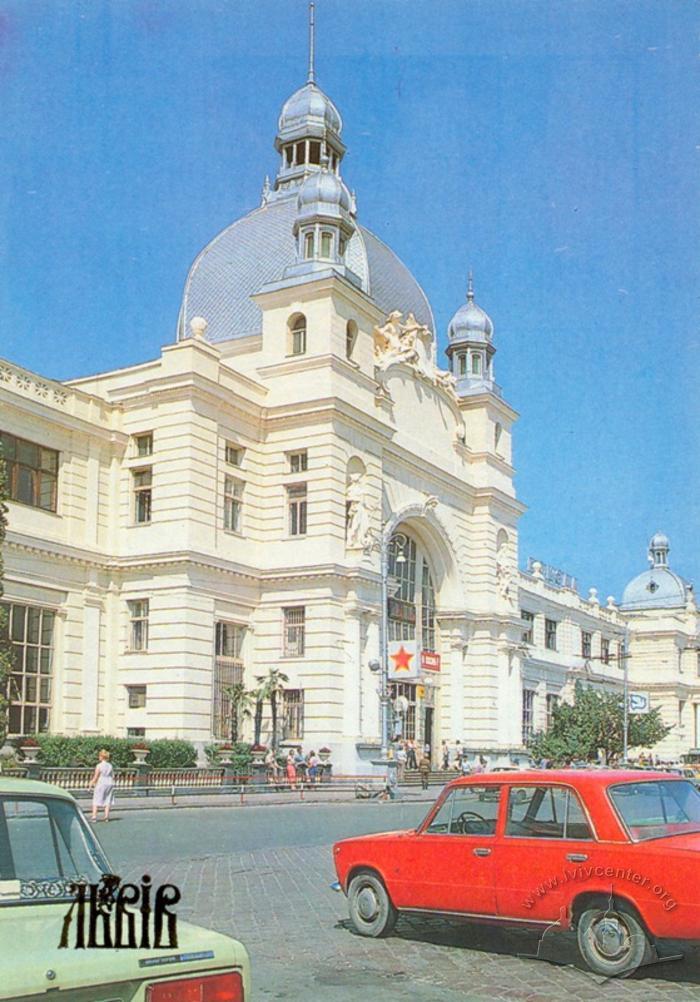 Lviv train station, built according to plans carried out in 1890, by the well-known architect Vladislav Sadlovski, profesor at the AgriculturalSchool, on the basis of given information, gathered by the director of the train station Ludwig Wezhbitz. Work on the project was carried out by experienced rail workers Y. Vysotski, F. Rybitski, senior commissars E. Tsyprian and A. Zazulia, architects A. Zakharievych, K. Zhechytski, H. Jablonski, Y. Hornunh, I. Kendzerski, T. Talovski. In 1902 the construction of this exemplary object began, which was realized by the building firm of I. Levyns’ky, A. Zakharevych and Y. Sosnovs’kyi. The momumental building of the Main Railway Station, built with the use of the newest technologies, was handed over to the city for use on March 26, 1904. On that day the dedication and grand opening of one of the biggest and nicest train stations in Europe at that time took place. Everything that surrounded the passenger in the train station’s building, created a feeling of comfort. Without a doubt, the Lviv main train station then was an example of the unity of art and technological progress, which for many years made it a favourite object for photographing. The buildings of the train station were temporarily destroyed in 1915 during the retreat of the Russian armies from Lviv. The station endured a lot of destruction during the battles for Lviv in 1918 - 1919, during the dramatic events of the Polish-Ukrainian wars; its full reconstruction was completed only in 1930, in fact, it was then that it became three-storied. On September 1, 1939, the Main Railway Station was practically destroyed by German air bombing. 150 km of rails on the area of 270 hectares were transformed into ruins. The trade station was ruined; telephone lines torn, Klepariv and Pidzamche stations ruined. A temporary train station was built in 1940, in 1941, 1 million krb. were set aside for the reconstruction of the train station. June 22, 1942 the train station and depot were bombarded once again, which brought about a temporary destruction. The Main Railway Station was rebuilt during the occupation. After the end of the war 6000 people worked on the reconstruction. The partly ruined main building, two locomotive depots, collapsed underground passages to the platforms, and platform trusses were reconstructed. In April 1945 a resolution was passed in the government “About the reconstruction and development of trade, transport and public utilities of the city of Lviv”. In the decree, the demands included, among others, the rebuilding of the passenger train station before October 1946. The reconstruction was finished in the established time period. The head of the Lviv train station at the time (1940-1949) was Petro Kas’ianovych Shakhrai, who up until the war was the head of the Odessa station, deputy head of the ministry of transportation of the South-Western railway, head of the Donetsk highway.