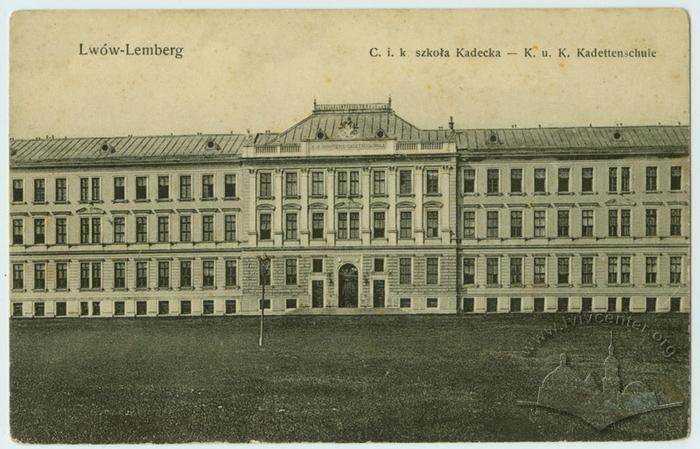 Military Institute of the National Polytechnical University in Lviv

The photograph depicts the Hauptgebäude or main building of the Infantry Cadet School in Lviv taken before April 14, 1900, or almost immediately after its opening. The cost of construction of the main building comprised 275, 960 florins, and 48 crowns. The building's fronton bears the inscription "K. u. K. INFANTERIE CADETTEN SCHULE" (Royal and Imperial Infantry Cadets School) under the state symbol (the black double-headed eagle), which was in accordance with the Austrian tradition. The idea of creating a military educational establishment first arose in early february 1890, when Lviv's then-President (Mayor) Dr. Edmund Mochnacki signed an agreement with the representatives of the military ministry, to build a Cadets School on the Vuletski Hills (in the higher section of the Kiliński Park (today Stryi Park)), behind the Stryi Cemetery, that could house and educate 200 students (Zoglinge). The lands of the future construction site were originally in city property, and were transferred to the Austrian Military Ministry at no charge. The estimated cost of the project was 500 thousand florins. However, due to lack of funds, construction start was delayed for more than seven years. In late 1898 construction of the Cadet School was practically completed. The majestic main building was constructed following a project by architect Filip Pokuciński, a graduate of the Munich Arts Academy. The school's building complex consisted of four buildings: the main building, the students' hospital, a staff building (with a kitchen), and the officers' building (which housed the main office and teachers' apartments. As was customary in the Austro-Hungarian Empire, the school's teachers were addressed as “Professors”), as well as auxiliary buildings (stables, a coach garage, the porter's hut, etc.). In July 1899 control over the Cadets School in Lviv was transferred to the military authorities, and classes were to begin in autumn. October 2nd, 1899 saw the festive opening of the newly-established Infantry Cadets School in Lviv.
Mykhailo Slobodianiuk