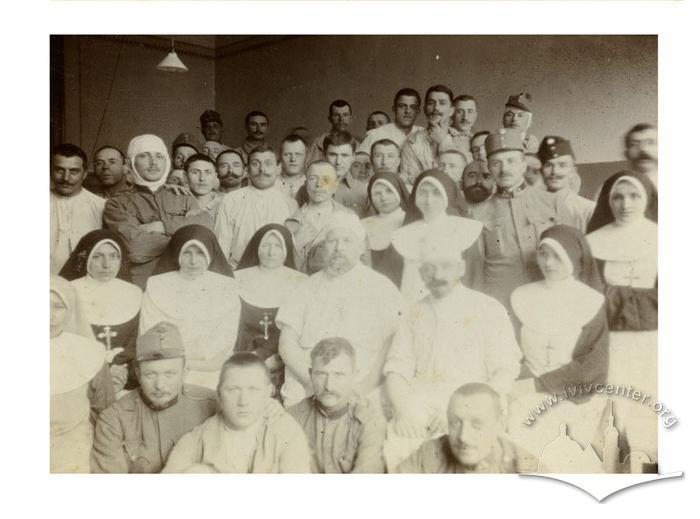 In the image- a group of sisters of the Marinoii Family and soldiers, whom the nurses cared for. The event takes place in the ward of the Red Cross Reserve Hospital No. IX on Solodova st.  In the middle of the group- a typical photograph “for posterity”- doctor Zenon Len’ko, a bright Polish urologist, who during the war stayed in the city and carried out his responsibilities in the Red Cross hospital. In as much as his image his present in all the photographs of this series, we can assume that doctor Len’ko was the head doctor of the ReserveHospital. Doctor Zenon Len’ko, urinologist by specialization, underwent all his studies in the branch of health protection- from laboratory assistant to doctor’s assistant to doctor at the GeneralHospital in Lviv (now the medical university). On top of this, doctor Len’ko, “father” of Polish urinology, was the one to create a specialized section for urological diseases and also taught a whole row of specialists of high qualifications. During the several days between the retreat of Austrian forces from Lviv and before the Russian armies entered the city, the Austrian Red Cross opened six hospital pavilions and several reserve ones. Possibly, this was done so quickly in order to leave all the clinics of the general hospital in their control, outfitted with the latest equipment and not to allow settlement of Russian military hospitals in these medical establishments. Beginning in 1895, this building was occupied by the congregation of the Sister Servants of the Most Sacred Heart of Jesus. Their congregation was formed in 1894 in Krakow by the canonist of the Krakow cathedral, bishop Pelczar, professor at JagellonianUniversity. The congregation received the name “Tercyarki Society Of St. Francis”; the sisters “tertsiarky” took care of poor patients and very elderly people. They had their own building in Lviv, on Solodova st., 10, and also No 6, where the hospital was. Perhaps the sisters of the Marinoii Family helped tertsiarky care for the wounded. Today this building houses the general education secondary school No 37 in Lychakivskyi district with a focus on the french language.