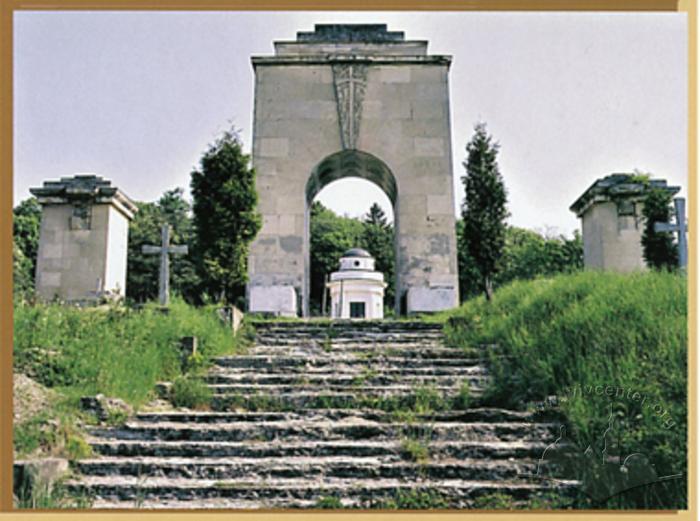 View of the Lwow Eaglets Memorial at the Lychakiv Cemetery, 1980s. The name "the Lwow Eaglets" refers to Poles fallen in the Polish-Ukrainian war of 1918-1919. Construction of the memorial took place from 1922 until 1939, but was never completed. In 1921 a competition was announced for a project of the Eaglet Cemetery. The competition was won by Rudolph Indruch, young engineer and student architect of the Lviv Polytechnic. The first stage of the project's implementation consisted in building a chapel. The cornerstone for this was laid on June 26, 1922. The chapel was consecrated on September 28, 1924. On May 30, 1925, a monument to American aviators was unveiled. Construction of catacombs lasted from the beginning of the project until October, 1932. April 28, 1929 was the day the cornerstone laying ceremony for the Glory Monument took place. The monument was subsequently unveiled on November 11, 1934. The 12-column portico bears the inscription "Mortui sunt, ut liberi vivamus." ("They are dead, but we live free.") A monument to the French Infantrymen was built on May 26, 1938 by the right wing of the catacombs. The cemetery sustained significant destruction in the Second World War and the early postwar years. Its final liquidation took place in the early 1970s. The graves were covered over with soil, the architectural elements - the collonade, the central stairs, and the sculptures of lions - were demolished. The present image shows a view of the Memorial's remains from the side of the Pohulianka. Renovation of the memorial began in 1989 by the efforts of the employees of the Polish company "Energopol." The unveiling ceremony for the reconstructed memorial was held in 2005.