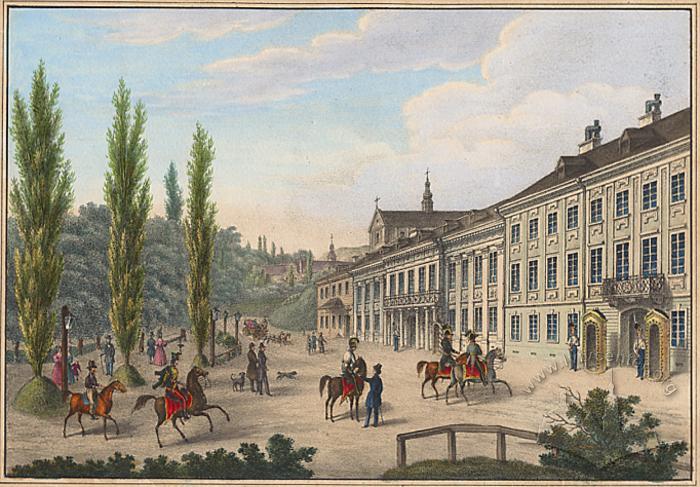 The picture presents the eastern side of Panska St (“Lords’ St.”). around the mid-nineteenth century. Panska St. was laid in place of an old road that ran along the western side of the external fortification wall, which surrounded the city center. In 1544 the street was known as Szeroka za Bernardynami (“Broad Street behind the Bernardines”), and after the Governor’s palace was constructed – as Pańska wyższa (“Upper Panska St.”). In 1871 the street was renamed Charnieckiego St., and beginning in 1940 it was known as Radianska (“Soviet”). In July 1941 the street was again renamed Czarnieckiego, in December 1941 it was given the name of Distriktstrasse, and from July through December 1944 the street was known as Charnetskoho/Czarnieckiego. In 1992 the street was named Vynnychenka St., in honor of writer Volodymyr Vynnychenko. To the right on the picture is the palace built in 1821 for the Governors of Galicia (the buiding now houses the Session Hall of the Regional Council (No. 16 in Vynnychenka St.); building No. 18 is the Chołoniewskis Palace (no longer extant); building No. 20 once held a postal carriage station, servicing the Lviv – Vienna route. A park with lanes, surrounded by trees and decorative hedges, was built where the ditches and bulwarks had once stood, based on the project of Provincial Counsellor Wilhelm Reizenheim. The new park instantly became a favorite place for city strollers, and was named Wały Gubernatorskie (Governor’s Bulwarks) because of its proximity to the Governor’s residence. A new building of the Galician Viceregency was built in place of the Chołoniewskis Palace and the stagecoach station (the building now houses the Regional State Administration).
Oleh Vvedenskyi