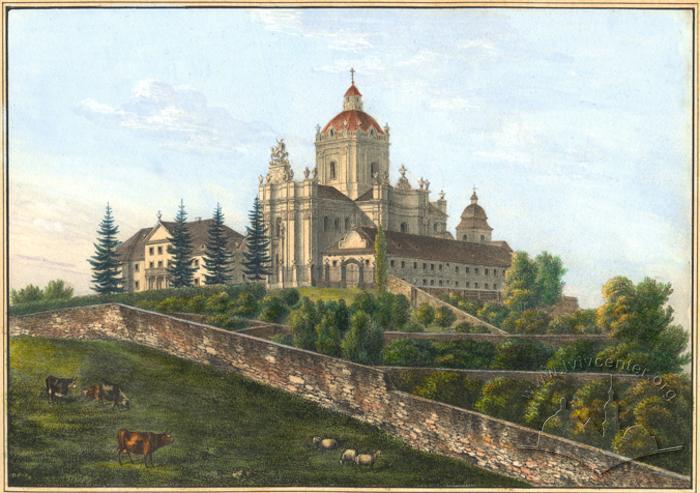 A picture of the western and southern façades of the St. George Cathedral with adjacent buildings. In the foreground is the Cathedral garden. Historical sources indicate that construction of the original wooden church dedicated to St. George started in 1280 by Prince Lev (Leo) for his uncle Vasylko, Prince of Volhynia. A monastery was later built next to the church. In 1340, when the army of Polish King Kazimierz III entered Lviv, the Church of St. George was burnt down. The wooden church was only rebuilt in a year, thanks to efforts of abbot Euthymius. The contemporary belfry of St. George’s Cathedral holds the last remaining object of principality-era Lviv – a 1341 bell, bearing the inscription: “This bell was cast in the year of 6849 to St. George, under [the reign of] Prince Demetrius, by Abbot Euthymius”. In 1744 Metropolitan Athanasius Sheptytskyi laid the foundations of a new church. This new church was projected, and its construction overseen by architect Bernardo Meretini. In 1762-1763 construction works on St. George’s Hill were overseen by architect Marcin Urbanik. From 1765 onwards construction continued under Klemens Ksawery Fesinger. A cross was raised atop the church’s spire on September 5, 1760, however construction was only finally completed in 1764, while decoration works continued until 1780. The Cathedral, whose fronton is crowned with a statue of St. George the Serpent-Slayer on horseback by the renowned sculptor Johann Georg Pinsel, constitutes the centerpiece of this late-Baroque architectural ensemble with rococo elements. The ensemble consists of the buildings of the Cathedral, the Metropolitan’s residence, the chapter houses, the belfry, and the Metropolitan’s Garden.
Oleh Vvedenskyi